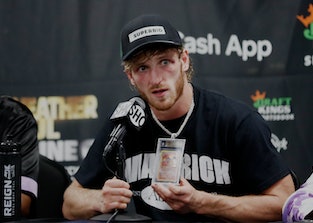 About how much he paid for... not Pokemon cards.

Oh, Logan. You’ve really outdone yourself this time. The multi-hyphenate YouTuber purchased a sealed box of Pokémon cards for approximately $3.5 million, only to find it packed full of G.I. Joe cards. You can’t make this shit up.

To make the matter even sadder, the card-collecting community was able to spot the fake box from a mile away. Last month, after Paul first announced the purchase of the supposedly “authenticated” set of cards, collectors quickly warned him that they were likely fake. Paul assuredly tweeted that the box was the “only known one in the world.”

But this is Logan Paul we’re talking about. This man will do anything — for any price — if he can make a video about it. It’s kind of his whole schtick.

So yeah, now Logan Paul has about a ton of worthless G.I. Joe cards and can’t really do anything about it. Or, as he so gently puts it in his video about the ordeal: “We got fucked. End of story.”

Same old Logan — If you’d like to hear the entire tale told through the eyes of a man with an extremely low capacity for empathy, you’re in luck. Paul posted a YouTube video this week documenting the full affair.

In the video, Paul flies out to Chicago to have a representative from the Baseball Card Exchange (a card-dealing business specializing in unopened packages) check the authenticity of the box he’d purchased. The representative explains that the box does appear not to have been tampered with in any way.

Paul pours himself a glass of red wine — “I ain’t gonna be sober for this,” he says — and tells the rep to open up the box. At first all seems kosher; the viewer watches Paul jump for joy as he catches a glimpse of the iconic Pokémon logo. It all goes downhill from there. The packaging is too puffy, the BCE reps notice. Sure enough, the boxes are not filled with Pokémon cards at all.

Pokémadness — Obviously scammers are a plague upon any community, and in most cases we’d hold ourselves back from poking too much fun at one of their victims. But this is Logan Paul, a man who has made an entire career of grifting. He’s also just ludicrously wealthy at this point. So it’s a bit difficult to feel sorry for him.

The whole ordeal also looks pretty bad for the Baseball Card Exchange. The company’s evaluation of the box as authentic was quickly proven false by a number of amateur collectors. The only digging it took to come to that conclusion: looking at the case’s history on eBay.

BCE says it’s re-evaluating its approach to all sealed cases and halting the sale of Pokémon and Yu-Gi-Oh! cases until its processes have been revised. As for Paul? He’ll be onto the next grift soon enough, this one just a silly story turned into YouTube monetization.