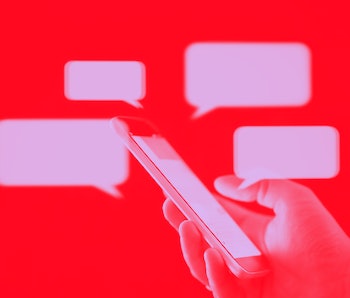 Though they won’t tell you much about it if you ask, all the major phone companies are automatically screening your text messages. This process is, for the most part, meant to protect users from spam text messages — less pervasive than email spam, yes, but a problem across the world nonetheless. (Apple even recently added official support for third-party SMS spam filter apps.)

Much of this process is completed automatically through the use of back-end screening technology, trained to specifically flag spammy messages. Sometimes these systems slip up and allow spam texts to come through — but the opposite is true, too. Text messages often go undelivered with no explanation and, unlike more modern systems, SMS does not usually alert users to their messages’ failure.

But what happens when the automatic screening process wrongly flags messages that the user explicitly opted into receiving? This is the nature of the problem being faced by SlutBot, a sexting AI that operates via SMS. SlutBot users have been flocking to the community’s official Discord channel to complain that they’re not receiving some of SlutBot’s messages — especially when they concern LGBTQ material.

Errors aplenty — The SlutBot team first became aware of this issue when users started complaining in the community’s Discord channel. Some users — there doesn’t seem to be a pattern — will receive SlutBot’s initial text message, but any follow-up content simply won’t go through. There doesn’t seem to be a pattern to which content is blocked. SlutBot is currently running a program about queer sex, though, and it’s largely messages related to this program that are being filtered.

SlutBot’s only insight into why this might be happening comes via Twilio, a communication API used for scheduling automatic SMS communications. Twilio reports errors through unique codes, and there’s a special one just for carrier filtering issues: 30007. The SlutBot team is seeing lots of those lately, as well as a similar 30008 error that essentially means Twilio couldn’t confirm carrier involvement in the issue.

Honest mistake or not, it’s a problem — This likely boils down to an issue with carriers’ SMS filtering programs. Machine learning models are notoriously finicky; whichever models are being utilized by carriers like Verizon and AT&T are likely flagging SlutBot’s messages as spam.

The SlutBot team tells Input they’ve faced SMS filtering problems before, but never to quite this extent. “Carriers are not transparent about the algorithms they use to scan customers' text messages. Protecting customers from spam is one thing,” a SlutBot team member said. “Censoring sex-positive, LGBTQ content that customers explicitly sign up to receive is another.”

This is a larger issue of carrier transparency (Twilio has an entire FAQ dedicated to SMS filtering in the U.S and Canada), but it’s also a business issue for companies like SlutBot. Twilio and similar services still charge for messages that are filtered by carriers. And from the perspective of a SlutBot customer, it just seems like SlutBot isn’t working properly. This leads to frustrations and potentially even customer departure.

When reached for comment on the matter, a representative from AT&T said: “Our systems for protecting our customers from unwanted or SPAM text messages don’t work that way and any suggestion otherwise is wrong.”

Verizon did not immediately respond to requests for comment on this issue. We’ll update our piece if they get back to us.

We’re hopeful this transparency issue is one carriers are forced to deal with in the not-too-distant future — there’s no good reason consumers shouldn’t be privy to the reasons why their SMS messages are rendered undeliverable.