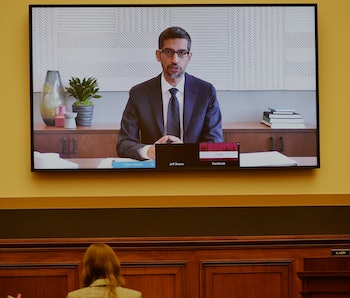 Google CEO Sundar Pichai, alongside the heads of Apple, Facebook, and Amazon, faced a grilling before Congress today about his company’s monstrous reach and the grip it holds on both the market and consumers. It’s a reckoning that is a long time coming — but one unfortunately overshadowed by moments that felt more like a targeted attack on the sole person of color on the stand. Where Pichai should have been interrogated about Google’s monopolistic behavior, he was, at times, forced instead to defend his commitment to “American values.”

The singularly narrow framing of questions directed at Pichai by Florida Representative Matt Gaetz, which attempted to stoke fears about China and paint the Google boss as anti-American, is a dubious approach not at all lost on us, and a disgusting perpetuation of the idea that people of color inherently represent an “otherness” that must be tamped down.

Grasping at straws — During a round of questioning, Gaetz latched onto Mark Zuckerberg’s insistence that Facebook is “an American company with American values” and challenged the other CEOs in the room to speak out if they felt otherwise about their own. There was, of course, no response. But Gaetz took it further, immediately directing his subsequent questions about patriotism to Pichai and only Pichai.

“Mr. Pichai,” he began, “I’m worried about Google’s market power, how it concentrates that power, and ultimately how it wields it.” In the back-and-forth, Gaetz grilled the head of Google about its broken “Project Maven” contract with the U.S. military — a result of employee outcry — and its relations with China, as well as its role in the current conversation about police violence against civilians. First demanding Pichai pledge his solidarity with law enforcement, he then repeatedly cut the CEO off during his responses.

“Why would an American company with American values so directly aid the Chinese military but have ethical concerns about working alongside the U.S. military on Project Maven?” Gaetz asked. He later doubled down: “When the Chairman of the Joint Chiefs of Staff says that an American company is directly aiding China, when you have an AI center, when you’re working with universities, and when your employees are talking about China ‘trembling the world,’ it seems to really call into question your commitment to our country and our values.” As Pichai noted in his answer to this, to say that Google is working with the Chinese military is “absolutely false.”

Google’s decision to back out of a military contract and reconsider its ties with police is not a unique one; all others on the stand have found themselves embroiled in similar controversies, and recently at that. Apple has been criticized for refusing to create backdoors that would help law enforcement break into suspects’ iOS devices. The company has also been swept up in the argument about Tech’s involvement with China. Amazon revoked police access to its Rekognition tech just this summer amid heightened police brutality and outcry over racial biases in such software. Facebook continues to be probed about its role in election interference and its potential for “undermining fundamental democratic values.”

But Sundar Pichai alone bore the brunt of any claims about Big Tech’s divergence from so-called “American values.”

Isn’t this an antitrust hearing? — This isn’t to say that Pichai deserved to be spared in any way by the scrutiny of Congress. Quite the opposite; the CEO must be held accountable for the ruthless, ethically hazy ways in which it’s secured the continued success of the Google brand. It’s been accused of flat-out stealing content from smaller businesses and making sure consumers cannot escape its search engine no matter how hard they try.

Google does have a lot of explaining to do, and it owes consumers and smaller businesses alike better treatment and greater transparency. To shape the argument against Google as a defense of Americanism, however, feels like nothing more than thinly-veiled racism.