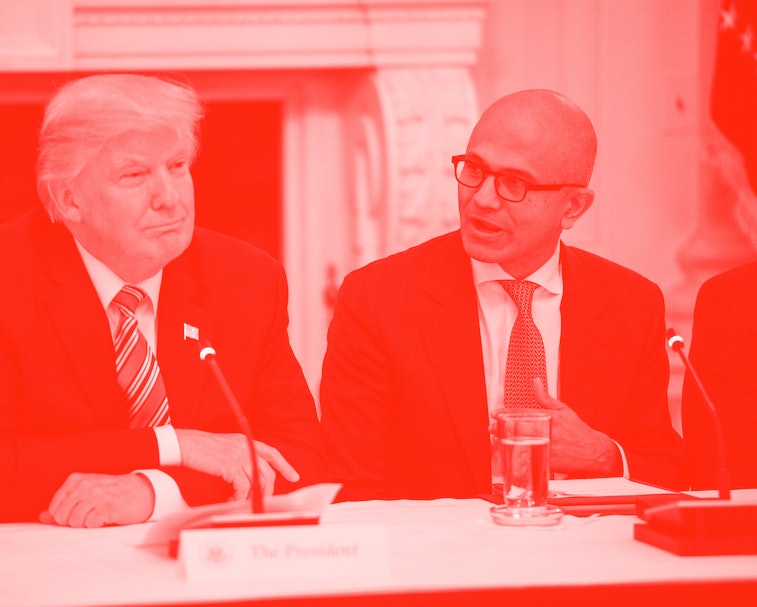 Microsoft has confirmed that it is in talks to purchase TikTok from its Chinese parent company, ByteDance, and may make moves before summer is out. The decision, according to Microsoft, follows a conversation between its CEO and President Trump, who just days ago threatened to use an executive order to ban the app from the United States. Trump reportedly gave Microsoft a deadline of 45 days to finalize the agreement.

In a blog post published Sunday night, Microsoft also said it may “invite other American investors to participate” in the deal, though “on a minority basis.” These discussions will be wrapped up by Sept. 15.

TikTok has increasingly come under scrutiny over largely baseless claims that it hands American users’ data over to the Chinese government. Detractors say even the potential for that makes the app, best known for viral challenges and teen dance trends, a national security threat. Trump has been among the loudest, though it's been speculated that his most recent outburst was nothing more than a negotiation ploy.

Unsurprisingly, security and data handling are front and center in Microsoft’s first official statement on the matter. “Among other measures, Microsoft would ensure that all private data of TikTok’s American users is transferred to and remains in the United States,” the company said. “To the extent that any such data is currently stored or backed-up outside the United States, Microsoft would ensure that this data is deleted from servers outside the country after it is transferred.”

TikTok has for months been trying to distance its image from China. The company announced a new, American, CEO in May and its parent company has made moves to limit Chinese employees' access to any sensitive data from the app. In July, TikTok said it plans to create upwards of 10,000 new jobs in the U.S. over the next three years.

Whatever TikTok's fate is, we won't have to wait very long to find out — but don't expect to hear anything else from Microsoft in the meantime. The company says it does "not intend to provide further updates" until a decision has been made. Per Microsoft:

The discussions with ByteDance will build upon a notification made by Microsoft and ByteDance to the Committee on Foreign Investment in the United States (CFIUS). The two companies have provided notice of their intent to explore a preliminary proposal that would involve a purchase of the TikTok service in the United States, Canada, Australia, and New Zealand and would result in Microsoft owning and operating TikTok in these markets. Microsoft may invite other American investors to participate on a minority basis in this purchase. This new structure would build on the experience TikTok users currently love, while adding world-class security, privacy, and digital safety protections. The operating model for the service would be built to ensure transparency to users as well as appropriate security oversight by governments in these countries. Among other measures, Microsoft would ensure that all private data of TikTok’s American users is transferred to and remains in the United States. To the extent that any such data is currently stored or backed-up outside the United States, Microsoft would ensure that this data is deleted from servers outside the country after it is transferred. Microsoft appreciates the U.S. Government’s and President Trump’s personal involvement as it continues to develop strong security protections for the country. These discussions are preliminary and there can be no assurance that a transaction which involves Microsoft will proceed. We do not intend to provide further updates until there is a definitive outcome to our discussions.

Update: This article has been updated to include new information regarding the timeline of the deal.