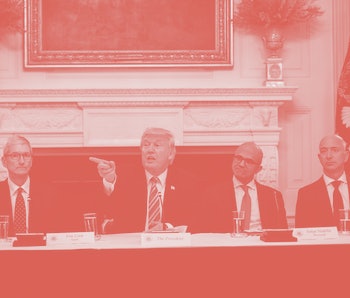 Microsoft’s reported interest in buying TikTok’s global business is not being taken too kindly by the tech company’s employees. Business Insider reports that leaked internal communications show a marked doubt in Microsoft's employee ranks about the implications of the potential deal.

The comments were shared on Yammer, the company’s internal social network, in a group called “CEO Connection.” The group is meant to be a place where employees can ask Microsoft CEO Satya Nadella and his team questions and discuss topics “that are relevant to the entire company.”

Microsoft’s potential acquisition of TikTok has already seen hefty criticism from the tech industry, most notably from Microsoft founder Bill Gates. In an interview with Wired, Gates called the deal a “poison chalice” and expressed concern over the responsibilities that come with navigating the ownership of a social media company.

Of course, Microsoft’s decision is a complex one, and major players in the equation, like President Trump and his administration, are going to hold much more weight than lowly employees.

Huge doubt — The leaked communications are by no means a measure of how the entirety of Microsoft feels about the potential deal, but they do provide at least some insight into how the company’s employees feel. And the opinions are overwhelmingly negative.

In one Yammer poll called “Should Microsoft Buy TikTok?,” 63 percent of the total 250 respondents responded “no.” Those in favor of the deal numbered just 19 percent, while another 18 percent answered “not sure.”

Some employees responded to the potential buyout with more precise and disdainful comments. “This deal is unethical from pretty much any perspective,” one employee wrote. “That Microsoft would even be considering stepping into this situation is unthinkable.”

Others linked their doubt about the deal to President Trump’s ultimatum to ban TikTok in 45 days if it hadn’t been purchased, a situation one employee called a “bribe.”

“Especially since Satya became CEO, I’ve felt nothing but pride to be part of this company,” that employee wrote. “This is the first time in a long time that I’ve had doubt gnawing at the pit of my stomach that maybe we’re not doing the right thing.”

Bleak, bleak, bleak — To say TikTok’s future — in the United States and, consequently, around the world — is in limbo would be an understatement. The Trump administration is dead-set on banning the app in the U.S. if Microsoft (or some other company) fails to purchase TikTok’s U.S. operations.

It’s still very unclear how, exactly, Trump would ban TikTok, but high-level opposition to the popular app would no doubt be a mortal wound to TikTok’s business, as well as to the many creators who make money and create community on the platform. Facebook-owned Instagram is already attempting to snatch up TikTok’s market with a clone called Reels.

Microsoft’s buyout of TikTok is estimated to be valued between $25 billion and $40 billion, which would make it the company’s largest acquisition ever. But it definitely won’t be its most popular one.