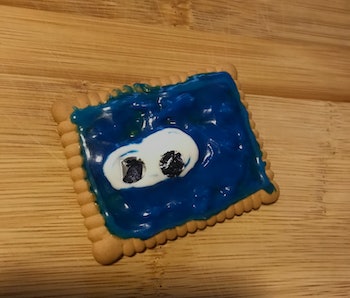 Let's get one thing straight. I have little to no interest in Sonic the Hedgehog. The speedy little character's debut on the Sega Genesis did not grab my attention in the way Mario and Luigi did (and continue to). Or even that highly addictive Nintendo game where you shoot plates in the sky. As Ray Wong recently wrote for Input, 2D Sonic games had a speed problem. To the young player, the velocity of the average Sonic game was a little too much to bear.

On top of that, as Wong notes, the game developers seem to have overlooked a simple yet critical element of comfortable gaming: color contrast. With multiple shades of blue, the game rapidly became nauseating combined with its momentum. To me, it was a visual nightmare.

With all of that said, I'm still not one to entirely write a gaming series and franchise off. So, I decided to make Sonic the Hedgehog sugar cookies to celebrate 60 years of Sega. It turns out that the internet is a huge fan of these blue-hued treats with Sonic grinning on them. I, however, created a monster.

What you'll need — Patience. I had none. So I went ahead and bought some colored icing in white, dark blue, and light blue. I also purchased a small bottle of blue sugar and sprinkles from the local Pavilions. To be clear, I had no idea what the hell I was doing. I attempted to follow this YouTube tutorial on making the perfect Sonic the Hedgehog that does not, in fact, look like a demonic creature. Here is my first attempt.

How to recover after your first disaster — As you can tell, things were not going well. My Sonic the Hedgehog cookie looked like a radioactive zombie begging to be put out of its misery. So I decided to give it another ago. This time, I placed 12 plain Leibniz biscuits down on a wooden board. I then covered the biscuits in a thick and ungodly amount of dark blue icing. I froze the top layer for 30 minutes and then proceeded to sketch Sonic out with a toothpick. Highly advanced techniques, as you can see.

I then covered said sketched Sonic with a slightly lighter shade of blue icing, alongside white icing for his eyes. Somehow the darkened blue icing crept into the white area and gave Sonic a serial killer look. Because baking is on the rise during COVID-19 lockdown, I couldn't find brown icing or proper ingredients for the rest of Sonic (not making excuses, trust me). So I fashioned his mouth of a crushed biscuits. Impressive, I know.

Conclusion — As agonizing as it was to see Sonic look like that, I ended up appreciating the character's appearance. For the longest time, I did not care for Sega's attempts to make Sonic a cultural icon. Past and most recent iterations didn't translate as impressive to me. But while trying to perfect the hedgehog's face on 12 boring biscuits, I felt a slight appreciation (and even new interest) in Sega and Sonic. There's something endearing about the electric-fast runner and how hard Sega has tried to win people over (like I am trying with this sugar cookie). Maybe once I'm done recuperating from what I created (a blue Frankenstein), I'll give Sonic an honest and sincere chance.