MyPillow Guy tries, fails to weasel his way back onto Twitter 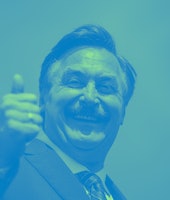 The number of hours MyPillow CEO Mike Lindell lasted on Twitter before getting banned again.

For someone as allegedly dedicated to toppling Big Tech’s nefarious, satanic, radical leftist agenda, the MyPillow Guy sure seems pretty desperate for its approval. Yesterday, Mike Lindell made his long-awaited, not-at-all pathetic return to Twitter under the new handle, @MikeJLindell... for barely three hours.

“Hello everybody, I'M BACK ON TWITTER. My only account is @MikeJLindell! Please RT and FOLLOW to SPREAD THE WORD,” the pillow man fired off to presumably dozens of adoring fans alongside a brief video clip for proof.

As Insider reports, Lindell decided to attempt his lamestream social media homecoming after becoming frustrated at the number of parody accounts exercising their free speech and claiming to be the MyPillow CEO. Of course, this wasn’t exactly a good enough reason for Twitter to reinstate someone banned wholesale from the app for repeatedly spreading dangerous, corrosive lies about 2020 election fraud conspiracies. And so, once again, Twitter shut down Lindell’s account.

Better luck next time, Mike. Hey, at least you still have your $1 million/month money pit of a scam site, right?

Be patient — Fortunately for Lindell (and unfortunately for the rest of us), the MyPillow Guy could actually get the chance to make his ignominious return to Twitter sooner or later. Should the social media platform’s new Technoking owner make good on his plans to transform the app into a “free speech absolutist” utopia, it’s certainly possible that Lindell will finally get the hollow validation he so desperately craves in the near future.

Do with that knowledge as you will; just be sure you’re being honest with yourself about it, though.

Trump, for his part, allegedly isn’t planning on attempting to return to Twitter anytime soon, telling Fox News recently that he’s going to “be staying on Truth,” referring to his own failure of a social media project.