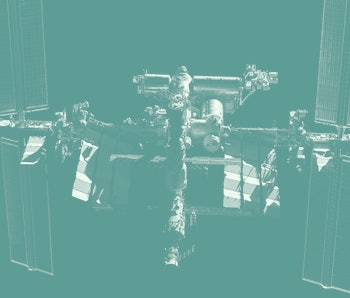 Earlier this week, NASA announced its revised plans for the International Space Station’s final years, including when and how it will decommission one of the greatest historic achievements in human exploration — they’re gonna yeet it into the Pacific Ocean sometime in 2031, basically.

It’ll be an emotional moment to see the bits of the ISS that don’t burn up upon re-entry plunge into the waters around Point Nemo — the farthest area of ocean from humans — not merely because it signals the end of monumental era in space exploration and science, but also because of what we now know will come afterwards. Although the writing’s been on the rocket for a while now, it doesn’t make it any easier to accept: The potential future of humanity amidst the stars lies not with publicly funded, governmental space programs, but with guys who like to dub themselves “The Technoking” and alter historic landmarks to make way for their superyachts.

No surprise, but still disappointing — In an official press release earlier this week, NASA lays it out pretty clearly: Government entities don’t have the funds or infrastructure to continue space travel on their own, and will increasingly rely on private corporations like SpaceX (and maybe Blue Origin... maybe) to do so for them. “The private sector is technically and financially capable of developing and operating commercial low-Earth orbit destinations, with NASA’s assistance. We look forward to sharing our lessons learned and operations experience with the private sector to help them develop safe, reliable, and cost-effective destinations in space,” says Phil McAlister, NASA’s director of commercial space.

McAlister also explains that the space agency’s report given to Congress lays out a “smooth transition to commercial destinations after retirement of the International Space Station in 2030.” Doesn’t get much clearer than that, folks.

Consolidating power — NASA has been awarding contracts to its seemingly inevitable heirs for a while now, developing partnerships with the likes of Elon Musk’s SpaceX. The government agency has come to primarily lean on Musk’s company alongside a handful of others to help achieve its goals. As NASA continues its sunset as a leading space exploration organization, people like Musk and Jeff Bezos are more than willing to step in on their own behalf.

Although endeavors to venture deeper into the cosmos and onto planets like Mars are exciting, transformative projects for humanity, it still feels somewhat hollow to know these achievements will technically be owed to billionaires who are currently in a pissing contest with one another. We understood for years there would come a time when government agencies would take a backseat on space travel, but it’s still difficult to see NASA itself acknowledge the fact. What’s more, there’s an actual expiration date on the calendar now.