Good luck with that

“They can have Rogan or Young. Not both.”

Neil Young, in an open letter 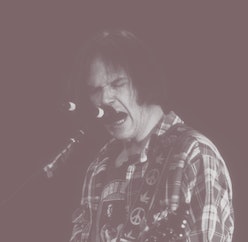 Joe Rogan’s continued presence on Spotify is perhaps the streaming platform’s most divisive long-term decision, but Spotify keeps Rogan on nonetheless. Famed singer Neil Young wants him booted badly enough to pen an ultimatum to the company, threatening to pull his music from the platform if Rogan’s contract isn’t terminated.

Young wrote an open letter — addressed to his manager and record label — about his concerns and posted it to his website. The letter has since been removed from the site, though Rolling Stone captured some of its more poignant moments in direct quotes.

“I want you to let Spotify know immediately TODAY that I want my music off their platform,” Young wrote. “They can have Rogan or Young. Not both.”

Young’s main complaint is that Spotify’s continued allowance of Rogan’s BS amounts to its approval of his love for vaccine misinformation. He’s by no means the first person to bring up this issue; earlier this month, nearly 300 doctors wrote an open letter of their own about the same issue.

Rogan’s long con — It wouldn’t take an internet expert to understand that Spotify’s exclusive deal to distribute Rogan’s podcast would prove to be a disaster. The damage done by the deal has proven to be even more extensive than we would’ve guessed a couple of years ago.

“With an estimated 11 million listeners per episode, JRE, which is hosted exclusively on Spotify, is the world’s largest podcast and has tremendous influence,” Young writes in his letter.

Rogan’s willingness to spew a continuous fountain of misinformation — not to mention conspiracy theories and general hate — is impressive. COVID-19 vaccine misinformation is only the tip of the iceberg, really. In recent episodes, he’s also compared pandemic mandates to the Holocaust and Nazism. (This, despite his fan base’s explicit far-right connections.)

Time to step up, Spotify — Spotify is not a neutral party in this debate. Turning a blind eye to the contents of Rogan’s podcast is a statement in and of itself. And not a kind one, at that. By providing Rogan a platform, Spotify is choosing its own profits over public good.

“Spotify has a responsibility to mitigate the spread of misinformation on its platform, though the company presently has no misinformation policy,” the letter reads.

If Spotify did deplatform Rogan, you might be thinking, wouldn’t he just find another place to distribute his misinformation? You’d probably be right about that — but Spotify, at least, wouldn’t be distributing his vitriol.

As to whether or not Young will follow through with his ultimatum, his manager says they’re still figuring out the best course of action, but that the issue is “really important to Neil.”