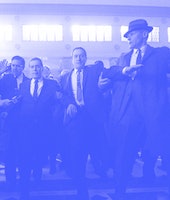 The total number of accounts that watched the film within its first seven days on the streaming service.

Netflix's highly anticipated film from director Martin Scorsese, The Irishman, looks to be a hit. The company has announced that the movie, which stars Robert De Niro, Al Pacino, and Joe Pesci, was streamed more than 26 million times in its first week. Netflix says a total of 26,404,081 global accounts watched The Irishman during that time frame, making it one of its most successful debuts ever.

Not as popular as Bird Box — While The Irishman's viewership numbers are strong, they still don't come close to Bird Box, the Netflix original from 2018. Ted Sarandos, Netflix's head of content, told Variety that the thriller starring Sandra Bullock garnered over 45 million streams from members during its first week. Bird Box, if you recall, was the center of endless memes and internet challenges where people would try to mimic the main character's "blindness." It's hard to know how much of that impacted the success of the film, but there's no doubt its virality helped create buzz around the film.

High expectations — According to Variety, Netflix expects The Irishman to be streamed by 40 million accounts in its first 28 days. Bird Box, in comparison, had an estimated 80 million streams during its first month. The Irishman may not come close to that, but Netflix and Sarandos still have high hopes that the Scorsese film will do well come awards season. So far, The Irishman has already nabbed five Golden Globe nominations, including one for best director.