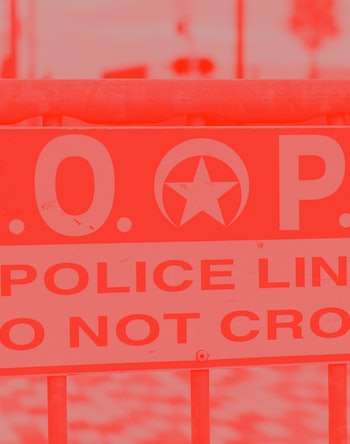 "The Police Department does not employ facial recognition software." This was the official line given to the ACLU in November.

One month later, New Orleans PD and city officials copped to the lie.

"The term 'employ' used in the [public records request] response might’ve referred to ownership of the tool itself, which we don’t. I apologize for any misunderstanding. Again, the word ‘employ’ was used in the context of ownership... The NOPD does not own Facial Recognition tools," NOPD spokesperson, Kenneth Jones, clarified to Michael Isaac Stein, a reporter with local independent newspaper, The Lens, in November.

Regardless of one's definition of the term "employ," the NOPD supplied the ACLU with dozens of pages of internal documents last week confirming police usage of the surveillance technology since at least July, 2018. Local law enforcement technically didn't "own" any of the proprietary software, nor did it necessarily license it itself. Instead, NOPD used workarounds in conjunction with federal agencies like the FBI, as well as local organizations including the Louisiana State Analytical and Fusion Exchange (LA-SAFE) to utilize identification tools like facial recognition.

Many emails appear to include photos taken from sources such as individuals' social media and the city's Real Time Crime Monitoring Center, which is technically under the Department of Homeland Security's purview and oversees over 500 cameras in New Orleans, making it per capita one of the country's most heavily surveilled metropolitan areas. Other email responses clarify to inquiring city detectives why certain images could not be analyzed. "Our system requires a full face with clearly designated eye sockets. Your subject is wearing sun glasses [sic] and is too far from the camera to be clearly viewed," reads one message.

Multiple city council representatives' publicly expressed surprise at the recent revelations starkly contradicting the NOPD's previous avowals, but the news is far from surprising for local residents with even the briefest knowledge of New Orleans' longstanding experiment in American panopticon management.

The Real Time Crime Center program launched in 2017, about three years after I moved to the city, and since then invasive security system methods have not only expanded dramatically, they now involve willing citizen participants. One such program, SafeCam Platinum, allows residents and businesses to register their own private cameras with the city, allowing their footage to be accessed by police as needed. SafeCam Platinum's website boasts it has saved the city over 6000 "public safety manpower hours," a not-so-subtle nod to New Orleans' ongoing budgetary disaster.

And yet, New Orleans' overall murder and robbery rates have largely declined in past years. Instead of divesting from security state strategies and a police force that tear-gasses protestors, however, New Orleans Mayor LaToya Cantrell and her administration recently pushed for various tax reallocations, including one notorious proposition that would have axed 40 percent of the public library system's funding over the next two decades in order to help pay for a dubious "slush fund." The fund would have no discernible oversight aside from a former short-term rental (aka gentrification factory) baron. Thankfully, the proposition failed by a sizable margin, even after an aggressive campaign of misinformation and intimidation from the mayor's office.

While NOPD still faces budgetary cuts, it remains one of — if not the — highest-funded departments within New Orleans. Not only that, it continues to invest in partnerships with companies like Carbyne, a tech firm with roots in Israeli military intelligence that counts real-life Bond villain, Peter Thiel, as an investor.

Carbyne provides third-party 911 management software to help New Orleans' genuinely overwhelmed EMS workers. The service, however, comes at a cost: having users dialing 911 waive their privacy rights. "Carbyne relies on callers submitting themselves to self-surveillance via their own mobile phone," wrote Forbes not long after the deal. "Once a caller uses their Android or iPhone to call 911 (85 percent of emergency calls now come from mobile devices), they receive a text message that asks for permission to get their precise location and access video from their smartphone camera." Another company, Briefcam, "can locate people based on their clothes or cars and with the ability to zoom in from a distance of two football fields," and cost taxpayers nearly $3 million. New Orleans officials claim to have stopped using the program late last year.

A tech firm with roots in Israeli military intelligence that counts Peter Thiel as an investor.

To throw salt in these many preexisting wounds, much of the above-mentioned surveillance technology has repeatedly displayed patterns of clear racial bias and all-to questionable results. There are already multiple reported instances of police using facial recognition software to identify dissenting American citizens, including within New Orleans itself, a city that is nearly 60 percent Black. Law enforcement's continued usage of untrustworthy, potentially civil rights-violating surveillance tech is somehow simultaneously unsurprising, ironic, and completely on-brand.

On December 18, New Orleans finally passed Ordinance 33021, which bans the law enforcement's "use of facial recognition, stingrays, predictive policing, and characteristic tracking," adding the city to a small but growing list of American cities supposedly barring facial recognition tech. The measure was co-sponsored by incoming District Attorney, Jason Williams, who campaigned and won his recent election by running on a progressive, reform-based platform.

"We are encouraged by the New Orleans City Council's passage of the ordinance," local reform advocate group, Eye on Surveillance, wrote in a press release. "...[but] the New Orleans Police Department along with its partner agencies must now work to ensure their practices prevent further abuse of the public’s trust. NOPD's policy development process for any new surveillance technology must be transparent and include the greater New Orleans community to ensure accountability, public input and a more equitable and just city."

Eye on Surveillance's statement stresses that much more still needs to be done, including "exploring solutions to harm that shift resources away from the punitive measures of criminalization and incarceration and towards Black and Brown communities that have been the most impacted by years of over-policing and surveillance."

"The city's surveillance capabilities continue to grow, and not just under the NOPD," Stein told Input in an email. "The city's surveillance system isn't housed under any one department, making it difficult to track. It's unclear whether any one person knows its full extent. The superintendent of the NOPD himself said he was aware that his detectives were using facial recognition software."

Williams, Eye on Surveillance, and many others helped bring light to this most recent debacle. Unfortunately, NOPD's blatant pattern of lies coupled with a mayor's office more concerned with pledging allegiance to land developers seeking to carve up the city into a Disney-fied tourist town means local New Orleanians almost certainly have only begun see the true scope of our privacy violations. And like the documents unequivocally proving facial recognition surveillance, the revelations will only come after considerable damage has already been done.