“Non-lethal robots could very well morph into lethal ones.” 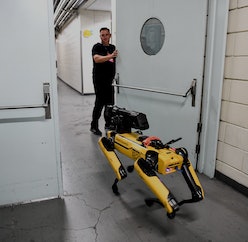 In late February, the New York Police Department deployed a robotic dog in the Bronx — Boston Dynamics’ Spot, renamed Digidog for the job. The sight was called "creepy" by pedestrians (rightly so) and since then has garnered attention from local council members.

One of them, Ben Kallos, is calling for a ban on armed robotics used by law enforcement agencies, according to Wired. If Kallos' ban takes effect, it would prohibit armed robots from parading the streets of New York. Unarmed robots, however, would still be allowed for official use.

Critics are likely to take issue with this distinction and insist that robotics in the hands of law enforcement, which is already known for using excessive and disturbing amounts of force on civilians — often those who are racial minorities and poor — is a bad idea in any iteration. After all, an unarmed robot can still surveil its human counterparts. Per Wired, the director of Ethics and Emerging Sciences Group at California Polytechnic University, Patrick Lin warns, "Non-lethal robots could very well morph into lethal ones."

Kallos said that he watched Digidog “in horror” in February after it was used to defuse a hostage situation in the Bronx. "I don't think anyone was anticipating that they'd actually be used by the NYPD right now. I have no problem with using a robot to defuse a bomb, but it has to be the right use of a tool and the right type of circumstance," Kallos said, according to Wired.

We still have a problem — Critics of such robotics warn that the use of armed bots by law enforcement agencies is the opposite of harm reduction and de-escalation efforts. They say that robotics such as Digidog only galvanize the militarization of police groups. As Wired points out, locals in the Bronx expressed mixed feelings about Digidog. Some were open to the concept of the NYPD robot but others said that they preferred human presence.

In efforts to distance itself from the growing criticism around Digidog and NYPD's affinity for the bot that looks straight out of Black Mirror, Boston Dynamics told Wired it prohibits the weaponization of its machinery. The company’s terms of service explicitly prohibits the use of its robotics to harm people. At least it says this much, noting that “the intentional use of the equipment to harm or intimidate any person or animal, as a weapon, or to enable any weapon” is not allowed — despite contradicting evidence of contracts with law enforcement including the Massachusetts state police.