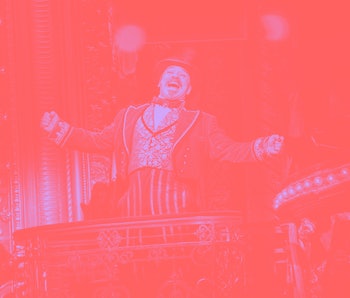 It’s been a grueling and months-long audition process, but they finally made the cut and are heading for the main stage: NFTs are coming to Broadway, everyone! Per Playbill (so you know it’s legit), Ross Golan’s The Wrong Man is slated to become “the world’s first non-fungible token (NFT) musical” later this year via the Terra Virtua platform.

Like most NFTs, it really just seems to boil down to some collector’s items related to the musical, including “a mix of music, graphics, and film, including the full animated musical, vinyl, posters featuring artwork from the musical, and a previously unreleased track from Golan.” Given physical items like “vinyl” are apparently included in the Broadway drop, honestly this feels more like an official webstore, just one that’s on “the blockchain” and accepting cryptocurrency.

Playbill also notes a new production of The Wrong Man is slated for 2023, by which time we assume Hamilton will have minted its own line of NFT memorabilia, too.

We’re running out of NFT venues — For those unfamiliar, The Wrong Man is a musical originally inspired by a folk song of the same name, and centers on a man who has a one-night-stand with a woman, but is then framed for murder by her ex-husband. So, you know, exactly the kind of performance that just screams “line of limited edition NFTs.”

While we are more than happy to see the blockchain provide new ways for creators to be directly and more fairly compensated for their work, the vast majority of releases appear to be your average digital collectibles matched with what amounts to a “certificate of authenticity” for purchases. That may be trendy and desirable for some, but for many others it just sounds like an overly complicated webstore setup at best, and a cynical cash grab at worst.

Referring to The Wrong Man as “the world’s first NFT musical” is a bit misleading. People buying these releases aren’t owning a stake in the play, or even a single song — instead, they’re purchasing various collectibles related to the musical itself.

In any case, it’s anyone’s guess where NFTs will infiltrate next. Whatever it may be, we can be sure of one thing: It won’t out-cringe the Applebee’s NFT drop.