“Fate has ordained that the men who went to the moon to explore in peace, will stay on the moon to rest in peace.” 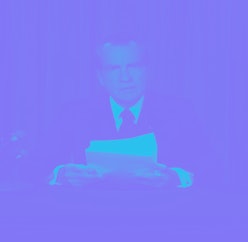 Would you trust the video? — Even before deepfakes became this sophisticated, their mere existence inspired distrust of videos. Though a Who Is Hosting This survey showed that 47 percent of Americans don’t think they can be fooled by deepfakes, the technology is rapidly approaching perfection.

How was it accomplished? — The actual script is a real contingency speech crafted in preparation for the worst-case scenario. Francesca Panetta and Halsey Burgund co-directed actor Lewis D. Wheeler went through roughly three hours of Nixon recordings to achieve accurate cadence and intonation. Then, synthetic voice-over tool Respeecher used that audio to create a synthetic Nixon, so anything Wheeler said could sound like the former president.

The directors also worked with Canny AI to create the video itself. The company used footage of Nixon’s resignation speech and Wheeler’s lip movements to create the new speech video. The deepfake explaining that the spacecraft is stranded on the moon plays after actual footage of Apollo 11’s journey that cuts out before the astronauts land.

"We are trying to communicate that deepfakes are kind of a continuation — or an extension, if you will — of a continuum of misinformation that we all should be aware of and should have our ears tuned to, if we can," Burgund told WBUR.

The full film installation will be available online in 2020, so we can all see how easily we might be influenced by false footage.