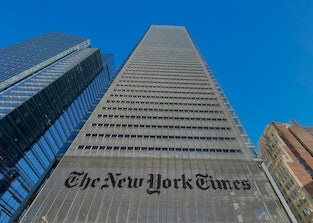 Over 300 tech workers employed by New York Times have walked off their jobs for a half-day work stoppage in protest of alleged anti-union tactics from the New York Times Company. The dramatic move comes after months of stalled negotiations, and is in direct response to what the NY Times Tech Guild claims are three specific instances of unfair labor practices (ULPs), as relayed to Discourse Blog.

“Times management, despite the paper’s nominally pro-union editorial stance and long history of dealing with unionized journalists... has resisted the Tech Guild’s union with the full playbook of standard corporate anti-union activities,” explains Discourse Blog, adding that the three ULPs in question relate to banning tech workers managing interns from overtly pro-union support, polling employees to gauge unionization support, and “saying in a meeting that workers would get more from management if they stopped their organizing campaign.”

Should the News Guilds complaints of ULPs go unresolved, NY Times and guild lawyers would head to an NLRB hearing, which could drag on for up to four months. “While all of this is dragged out, management can continue to hold captive audience meetings, disseminate anti-union propaganda, and chip away at the Tech Guild’s support,” writes Discourse Blog, which is pretty much precisely what the NY Times management is counting on.

By all accounts, solidarity remains strong within the union’s ranks, so while it might lengthen the bargaining timeline, in the end, it sounds like the group is committed to getting what they’re due.

Similar anti-union stances across the industry — Unfortunately, the New York Times Company’s latest attempts at discouraging unionization are only part of a far wider wave of anti-union sentiment in the tech industry. Although Amazon won against unionizing efforts at its Bessemer, Alabama, warehouse earlier this year, the NLRB is currently investigating its tactics at both that location, as well as in New Jersey, where managers reportedly confiscated a worker’s pro-labor literature. Meanwhile, Activision execs continued their streak of being absolute jerks last month when they hired a union-busting law firm despite previous pledges to the contrary.

Hostile stances against labor are nothing new within the tech sector, but it’s never encouraging to see such efforts undertaken so boldly by companies. Still, it’s generally hard to put the genie back in the bottle once a group of workers decides to unionize, so our fingers are crossed for the NY Times Tech Guild as well as the many others continuing their fights across adjacent industries.