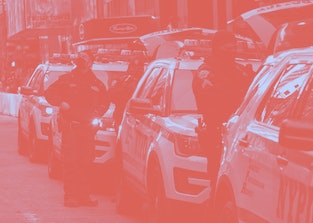 The number of active NYPD officers whose info can be found using the new dashboard.

The New York Police Department has quietly begun publishing previously sealed misconduct records for its officers, nine months after lawmakers repealed a law shielding them from public eye. The repeal was urged on by last summer’s protests following the murder of George Floyd as a measure of transparency about police misconduct.

The records are being published on a new dashboard on the NYPD’s website. Behind the dashboard is a searchable database for all 35,000 active NYPD officers, complete with summaries of any misconduct reports that have been filed against them. More than 200 decisions by judges in administrative trials have been posted online, too, though those documents are still redacted.

The initiative is leaps and bounds more transparent than the NYPD has ever been about its officers’ records. But much is left out of each officer’s record; what the public can see is really more of an overview than anything else. Experts worry the public might put too much trust in these reports without questioning what’s being left out.

There’s a lot missing here — NYPD Assistant Chief Matthew V. Pontillo says the new database is a lot like browsing baseball cards: there’s an overview of each complaint made against an officer and its outcome, as well as promotions and commendations. It’s more of a summary than a detailed record. Pending cases aren’t included in the database at all, and neither are complaints where the officer was not disciplined. Videos or reports used as evidence are not included in the database.

There is purposeful curation here. Critics of the database have pointed out that several NYPD officers with known misconduct allegations show no such records on their profiles, The New York Times reports.

“They’re intentionally excluding thousands of racial and other discriminatory profiling complaints and other records that would show a more complete picture of police violence,” said Lumumba Bandele, spokesperson for Communities United for Police Reform.

Still, it is progress — The database is much better than what we had before, which was nada, zip, zilch. It is much more than the vast majority of police forces release to the public. It is — hopefully — a beginning, some motivation for other police forces to follow suit. Some experts have praised the NYPD’s new dashboard for simply existing at all. Chuck Wexler, executive director of the Police Executive Research Forum, called the records’ release “a huge step toward greater transparency.”

We’ll take the bit of progress. But we won’t stop fighting for more.