Oh god, Trump's alt-Twitter is supposed to launch next month

“Uncle Jim from Atlanta is a proud libertarian. Aunt Kellie from Texas is a staunch conservative. Your cousin John from California is a die-hard liberal. And guess what? They’re all together to have an amazing time and share their viewpoints of the world.” 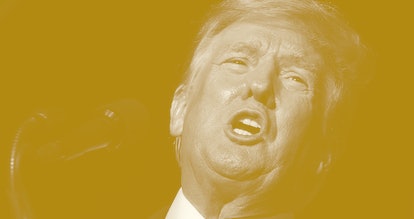 Truth Social, the unfortunate new social media platform developed by Donald J. Trump’s cronies, is all set to launch on February 21. Or at least that’s what the App Stores says. Whether or not Truth Social actually meets that deadline for its launch remains to be seen.

First announced in October, the anti-woke anti-Twitter is Trump’s answer to his being banned from all mainstream social media platforms since January 2021. Truth Social, along with Trump Media and Technology Group, were both created to “stand up to big tech” and focus on “free speech.”

The platform’s landing page still contains no information about when it might launch. Its App Store listing, however, claims the app version of Truth Social will be available for download on February 21. Which gives us approximately 45 days to prepare ourselves for the inevitable onslaught of news about the Truth. Ugh.

Cursed from the start — Sources familiar with Truth Social’s innards have confirmed the February 21 launch date, but there’s really no telling whether or not that’ll happen. Truth Social’s first beta testers were meant to be allowed into the site in November and that just… never happened.

That missed beta test date could be related to the revelation that Truth Social is a straight-up clone of decentralized social media network Mastodon. Team Trump tried to pass the site off as its own creation, crossing its fingers that no one would notice.

Mastodon’s software platform requires anyone who uses it to make the site’s source code available for public consumption. So Trump Media and Technology Group either needs to do that when the site launches or it’s been redesigned from the ground up in the last few months.

How is this gonna work lol — There are about a million different ways in which the launch of Truth Social could go wrong. Just let your brain run with it, you’ll come up with at least eight or nine.

One of the most glaring issues, though, is that the reality of its purported mission will almost certainly not line up with App Store guidelines. Remember the Parler debacle? The only way it was able to weasel its way back into the App Store was by filtering out the worst of its users’ vitriol. Will Team Trump really be willing to go back on its “free speech” mission to stay in the App Store?

And that’s just an issue it’ll face with Apple. If Truth Social devolves far enough, it could face legal repercussions. Here’s what we do know for sure: It’s going to be a mess. And we probably won’t be able to look away.