One of Activision's top organizers just walked out for good

“This may seem harsh, but you had years to fix the culture and look at where the company currently stands.” 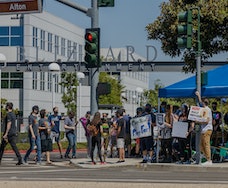 Jessica Gonzalez, an organizer of the employee walkout at Activision Blizzard last month, has tendered her resignation to the company. Gonzalez, who worked as a senior engineer at Activision for more than two years, posted a note on her public Twitter account about her departure on Tuesday. She will be leaving game development for a role at a financial tech company.

Gonzalez spends much of the note — which appears to be a screenshot of an internal Slack message — thanking co-workers for sharing her vision of inclusion and workers’ rights at the company. She thanks them as well for helping to create products she can be proud of.

The note’s finale is its most impactful moment (surely as Gonzalez hoped). She addresses it to Activision Blizzard CEO Bobby Kotick, tagging him directly.

“To @bkotick: Your inaction and refusal to take accountability is driving out great talent and the products will suffer until you are removed from your position as CEO,” Gonzalez writes. “This may seem harsh, but you had years to fix the culture and look at where the company currently stands.”

Other employees echoed this sentiment, pointing to Gonzalez as a source of the current strength of the employee organizing movement at Activision. Nearly 2,000 employees have now signed an open letter calling for Kotick’s resignation — Gonzalez’s voice has, by all accounts, been pivotal to that movement. The movement she helped energize is stronger than ever.

Bobby, are you listening? — One of Gonzalez’s last wishes as a member of the Activision community is that Bobby Kotick step down from his position as CEO. This is a call that is now echoing from every corner of the gaming industry. Executives from Microsoft and Sony denounced Activision’s responses soon after the employee walkout, and Nintendo of America president Doug Bowser did the same not long after in an internal memo.

Kotick himself has explicitly said he’ll consider stepping down if he can’t “fix” the company “with speed.” This is the final point Gonzalez addresses in her resignation note: Kotick has had many years to find solutions and has implemented none.