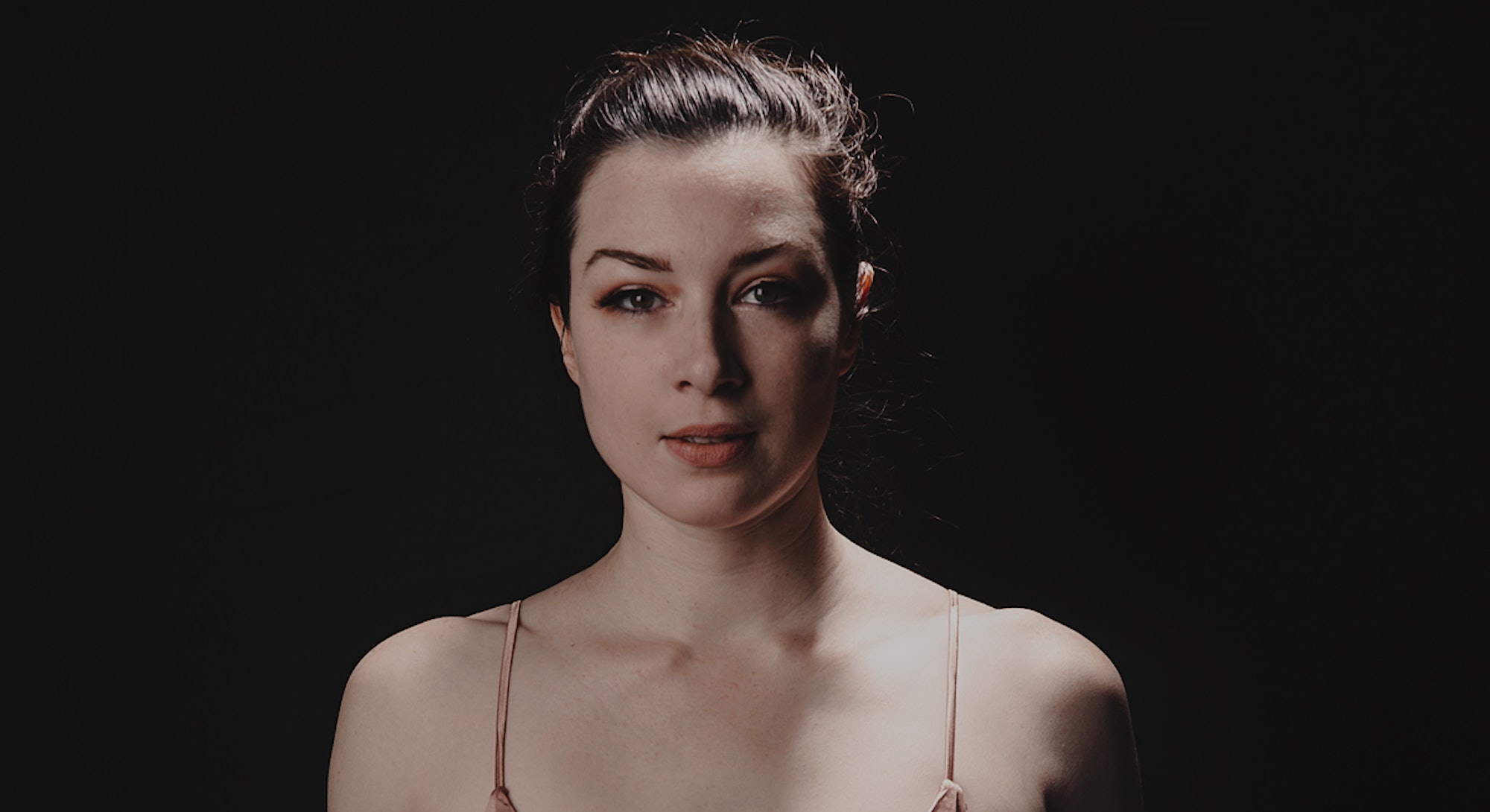 When Aedan Rayne got into a car wreck in 2014, wrapping her Mini Cooper around a palm tree at 45 miles per hour, she faced a long road to recovery.

The adult cam model, who started on MyFreeCams 11 years ago, was partially paralyzed in her right arm and developed a neurological disorder called complex regional pain syndrome, which left her in agony.

In the years after, she began the seemingly never-ending journey through doctor’s offices and hospitals for treatment to try and bring her back to some semblance of good health. There were crushing lows as well as unexpected rallies. But the one constant was the Penguin Army.

That’s the name Rayne gave her devoted following (she’s obsessed with penguins), who rallied around her to offer emotional and financial support through her OnlyFans page, where she’s now in the top 0.9 percent of creators.

“I didn’t even have to request,” Rayne says. “They just came forward and started supporting me. That honestly was more valuable to me than the financial aspect of things.” And as she lay in bed recuperating, the Penguin Army’s encouraging messages helped get her through the extreme pain and struggle of recovery.

But OnlyFans’ announcement last week that it was banning explicit adult content — which the company backtracked on today— got Rayne worried. “It’s more than just the loss of income,” she says. “Losing my fanbase — the thought I might wake up one morning and suddenly they’re gone — is a concern.” (One model tweeted that over the past week she’d lost 500 subscribers — which she tells Input was around one-third of her total audience on OnlyFans — due to the site’s “indecisiveness and poor communication.”)

Rayne is currently trying to port the Penguin Army over to FanCentro, a competing subscription-based adult website, but in the long term hopes to move them to Patreon. “I can’t imagine losing them,” she says of her community. “They’ve been so good for my mental-health struggle, and great for my physical health, too. And I know that I do the same for them.”

“OnlyFans has all these different relationships that are beyond the $10 a month.”

To detractors, OnlyFans is seen as just another way for people to get off to their favorite adult stars. But for those who create content on the platform, it’s much more. It’s a lifeline for those who are unwilling or unable to work a different job, and one that gives them control over when, where, and how they work. For some, it’s a much more personally fulfilling alternative to the major adult movie studios, which call the shots about with whom and for whom you work. But more than that, it’s a place to build a community that supports creators and celebrates their successes — and, in some cases, a place where paying patrons have become friends.

“It’s such a sprawling thing,” says renowned adult performer Stoya, who joined OnlyFans because it most closely replicated the sense of community she found on the alt-porn sites she made her name on early in her career. “It has all these different relationships that are beyond the $10 a month and especially beyond the ‘Here’s a picture of my dick, tell me it’s beautiful’ that people who haven’t worked in OnlyFans or the sex industry might think it is.”

Over time, Paul built up an audience of between 20,000 and 25,000 paying subscribers to her OnlyFans — one she worries won’t come along with her to the personal website she’s trying to set up given the uncertainty over at OnlyFans.

“I don’t really work in the studio system any more by choice, and OnlyFans and my ‘internet boyfriends’, as I affectionately refer to them, kind of liberated me out of that,” she says. Paul’s internet boyfriends subsidized her ability to go to therapy during lockdown and to deconstruct her own Southern, far-right evangelical upbringing.

“I can’t convey to you how this group of a few thousand men have been so kind to me,” Paul says. “OnlyFans and these internet boyfriends stood in the gap for me. No partner, no uncle, no brother, no father had effectively created safety for me in the way that these men on the internet had. They created rest for me for the first time in my life — to be able to go and receive healthcare, get treatment, and see real meaningful improvement in my condition.”

OnlyFans creator Kimmy Kalani feels similarly. “I have noticed a good amount of fans reassuring me through tough times, especially now,” she says. “Knowing that they see me as a human, unlike the rest of society, makes me feel less alone and reminds me they do care.” Kalani has built up her fandom and sees it as a support group — but is worried that the OnlyFans drama will have an impact.

She’s planning to move on from OnlyFans because of the flip-flopping, but doesn’t know if her audience will follow. “It does make me a bit more fearful because some of my fans might stay on OnlyFans because they may also have other models they follow who are staying,” she says.

The sense of community on OnlyFans is also what attracted trans creator Lucien DeLune to the platform. DeLune started his OnlyFans — where he now has 16,000 free subscribers and 100 who pay to see his content — as a way to track his transition publicly. “I wanted to document the changes that were occurring as I began hormone replacement and figured maybe someone else would be interested in seeing it as well,” he says. It also had a side benefit of helping pay for his top surgery.

But DeLune’s OnlyFans is even more meaningful to him than that. Of his 100 paying subscribers, around 10 he considers true, close friends. “I talk to them regularly about so many things,” he says. “Their lives, their passions, how work goes.” For DeLune, it’s also different than past jobs in that it allows him to be himself while keeping his interests at heart. “I do really enjoy connecting with people in general, and being able to make people happy,” he explains. “I’ve always looked for that in the jobs I’ve worked, but it always seemed to require an unfortunate compromise. It’s not really that way with OnlyFans. Either you offer something, or you can find someone else who does, and they get what they’re looking for.”

Creators of all stripes should constantly be prepared for the rug to be pulled out from under them, says Lee Hair of Boston University, who has written research on how connections between creators and fans on Patreon are more than just financial relationships. “This is a problem that is not unique to sex workers,” he says. “There is always the possibility of a platform collapsing at any point.”

The issue isn’t necessarily the stigmatization of content, says Hair, but the power imbalances that underpin these platforms. “There’s constant insecurity for these creators because they have no stake in the platform’s actions. They have no say.”

The answer is to diversify. “Though it’s more effort, it’s more beneficial in the long run to not be left out in the cold,” Hair says. But that has its own issues. Those relationships between creators and their fanbase are what sex workers worry most will go missing if they feel compelled to move their followings from OnlyFans — in large part because the site offered more semblance of community than competitors.

“OnlyFans had a uniquely social media–like feel to it.”

“OnlyFans had a uniquely social media–like feel to it,” says Stoya, who uses the platform to hang out with her fans. “In my chat room, I do weekly live shows,” says Stoya. “I sit there in nice lingerie, and I talk about my week and a lot of the time that’s like, ‘I took this professional development course,’ or ‘I had to research this thing for my column.’”

The connections she’s brokered through those chat rooms have helped her in real life — just as friendships do. One of her fans is an academic who helped her prepare an application for a summer residency program Stoya took part in; others are mental-health professionals who directed her to resources that helped her frame her columns through a more trauma-informed lens.

Following in the footsteps of many digital creators, Stoya is looking beyond OnlyFans. She’s set up an account on AVN Stars and FanCentro. She’s waiting to be approved by LoyalFans and others. But she’s worried about the scattering of creators to the four winds.

So too is Aedan Rayne. “As an individual, particularly a sex worker, all you can do is mindfully evaluate the situation and go where you will have the most success and stability,” she explains, just after OnlyFans’ reversal of last week’s announcement. She notes with interest the use of the word “suspended” in the company’s tweet announcing the change. “That says to me that it's important to continue the process of diversifying and getting established on trustworthy platforms to ensure future success,” she says.

She’s still planning on moving the Penguin Army to FanCentro and ultimately Patreon — OnlyFans be damned.