“Our company was founded in Silicon Valley. But we seem to share fewer and fewer of the technology sector’s values and commitments.” 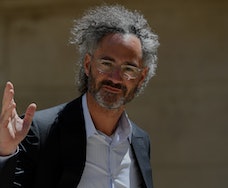 Palantir Technologies, the data-mining firm co-created by PayPal founder Peter Thiel and helmed by CEO Alex Karp, is going public. And it’s not beating around the bush when it comes to its opinions of the tech sector.

Ahead of its initial public offering, Palantir filed the necessary paperwork along with an open letter about the state of the tech sector. The letter is signed by Karp and posits Palantir as something of a savior for the industry.

“The engineering elite of Silicon Valley may know more than most about building software,” Karp writes in the letter. “But they do not know more about how society should be organized or what justice requires.”

Despite being clear on his opinions of the tech world, the rest of Karp’s letter is rambling at best. It’s at turns meandering and haughty, with almost no concrete reasoning as to why, exactly, the public should want to invest in Palantir’s future.

A Palantir primer — Before delving into Palantir’s IPO — and this mess of a letter — it’s useful to first understand why Palantir exists, something Karp never really gets at in his letter.

Palantir is a software company that specializes in customized big-data analytics. PayPal co-founder Peter Thiel first conceptualized the company in the early aughts as a way by which he could utilize technology to “reduce terrorism while preserving civil liberties.”

The company’s mission is still very much one of anti-terrorism, which is why the public doesn’t often hear much about its offerings — they’re top-secret, covered by the strictest of NDAs. What we do know is somewhat disturbing; Palantir has contracts with the Immigration and Customs Enforcement (ICE) office, and its technology is used to track and kill people.

Other, less deadly government entities have also found Palantir’s technology useful. Most recently, the company’s intense data-driven software has been used in tracking the spread of COVID-19 across the U.S.

About that letter… Palantir’s executive leadership has always been confident that they’re not like the other tech bigwigs. This seems to be the point Karp is trying to make in his letter, too — that Palantir isn’t your average tech company.

“Entire companies can subsist for years on a business model that may have made sense at some point in the past. In the short term, there are often profits to be extracted from the enterprise, and from customers,” Karp writes. “We have rejected this way of working. The alignment of interests between our employees and our company, and between our company and our customers, is one of the principal reasons we have come as far as we have.”

Much of the letter reads like this. Karp is definitely trying to say something here. His letter reads as more of an abstract manifesto than an open letter preceding an IPO, though. The overall idea is one of disdain for the tech industry’s data-driven practices, which do often tend toward the invasive. It’s obvious Karp has been thinking about this for a very long time.

Karp’s words are impassioned and brash, but they don’t paint a very clear picture in convincing investors to sign onto the company’s mission. It doesn’t help that, in its nearly two decades of existence, Palantir hasn’t yet turned a profit.