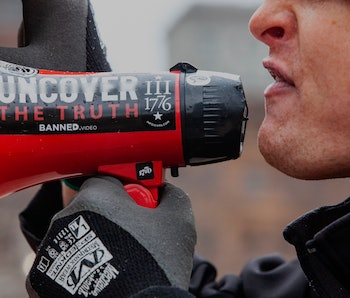 Parler, the social network focused on “free speech” that attracted the sort of people who plot to overthrow their government, is reachable on the internet again… well, its homepage is, at least. It's filled with messages about the network’s future, but the rest of the site is still inaccessible.

On Monday morning, Parler’s homepage emerged from the void with a simple message: "Technical Difficulties." The page is static and has no working links. “We will resolve any challenge before us and plan to welcome all of you back soon,” the message reads. “We will not let civil discourse perish!”

The site’s anticlimactic return comes just a week after Amazon dumped Parler from its web hosting services. Despite being briefly deplatformed, Parler quickly found a willing new host in Epik, a service provider with a history of alt-right customers. It turns out Parler is also receiving help from a Russian company (read: two men) called DDos-Guard, which helps protect websites from security breaches.

And so it seems our days without Parler are numbered. But the network’s future is far less certain. Particularly as it's thus far failed to secure the one account it really wants: that of Donald Trump.

Moderation or censorship? — Parler’s claim to fame is its claim it serves as a safe haven for conservative voices that claim they're being censored elsewhere. This talking point has seen increasing popularity as of late, especially since Trump himself was banned from Twitter (along with Facebook and Snapchat, among others) following the attack on the Capitol on January 6. Trump’s loyal supporters swiftly cried foul and left mainstream social networks for alt-networks like Parler and Gab... only Trump didn't follow them, because his support team has discouraged him "fringe social media platforms."

But much of Parler’s user base, as well as those running the site, has a complex and deeply flawed understanding of what constitutes censorship. By removing those who incite violence, spread disinformation, and otherwise use these platforms for harm, social media companies are simply moderating their sites — as is their responsibility as owners of these platforms, and their right as private enterprises. At the same time, big tech having the power to summarily cut services to incendiary figures or groups having previously let them flourish deserves further scrutiny.

Heading towards a breaking point — All this Parler drama prompts more questions than it answers. What kind of policies should the government be creating to ensure the internet isn’t causing more harm than good? Should a private company be trusted with the power to moderate such a large forum? Should Section 230 be reformed, and if so, what should it look like? Should Facebook and Twitter be able to dodge the editorial responsibility to accurately represent facts and highlight lies when they're many people's primary news source?

These questions don't have simple answers. The digital networks we've built, and the way they're designed to thrive on engagement first and foremost, are beginning to show their flaws. Parler is a symptom of the problems, not a solution to them.

Even if Parler does manage to find a way back online, it's moment may have passed. Its app isn't allowed on Google Play or Apple's App Store and it's unclear how much of its user base will continue using its difficult-to-navigate mobile browser site. But if it dies, you can bet another service will spring up to take its place, and we'll be left trying to answer the same questions.