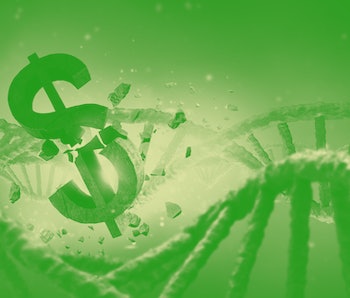 ‘If you’re going to make money off of my data, at least comp me for it.’ The thought may have crossed your mind at some point as you read countless reports on big tech’s questionable methods of handling — and profiting from — our private information. Now that the use of our data seems almost inescapable, well, we ought to get something out of it too, right? At least, that’s how most people are feeling about it nowadays, according to a new study.

We’re wisening up — Genetic-testing companies, in particular, have been the subject of scrutiny in recent years. While people may hand over their information willingly in these situations, they often have no idea what will be done with it for the company’s profit later on. That uncertainty has, understandably, led to a lot of upset, especially after the high-profile arrest of the Golden State Killer, which was strongly aided by DNA from a genealogy database. It may not have been glaringly obvious before that your DNA data can be used for things other than the initially-agreed-upon purpose, but it is now. This has prompted some companies to be more upfront about their plans for your DNA data, even if those plans are controversial. But, consumer participation has plummeted anyway.

As it turns out, people aren't entirely against these practices — but they'd be a lot more keen to get involved if they were compensated and had some degree of control. Go figure!

What consumers actually want — In a study set to be published in the journal PLOS One, researchers from Penn State and Cornell University surveyed 2,020 people recruited through Qualtrics and questioned them based on interviews with officials at a dozen genomic governance organizations. Researchers made up five fictitious companies and presented participants with a scenario:

The resulting reports, for those who wanted to participate, would provide detailed information on ancestry and risk forecasts for 20 genetically based health conditions. Respondents could choose from one of four answers: “Willing as a charitable donation," "Willing if I'm paid at least a certain amount of money," "Unwilling, at least for now," and "Unwilling, now or ever.”

It’s a hard sell no matter what — Unsurprisingly, people were mostly down to share their data if there was money in it for them. Half of the participants said they would do so if compensated, compared to just 11.7 percent willing to do so as a simple act of charity. But, tellingly, 37.8 percent of participants were unwilling to provide their data whether they’d be compensated or not.

Giving participants the ability to request that their data be deleted goes a long way in getting people involved, the study found, as did assuring them their data would not be sold or shared to outside parties or reused without specific permission. On the other hand, participants were far less willing to share their information if access to that database would be provided to pharmaceutical firms or the federal government, and if there were no specified plans to later destroy the data.

The next steps are pretty obvious — "Our results suggest that as public awareness grows regarding the commercial aspects and privacy issues of genomic databases, individuals' expectations for compensation in exchange for data provision may rise," says Forrest Briscoe, professor of management and organization at Penn State.

So, you know, try a bit of transparency and some tangible reward. Then we can start talking.