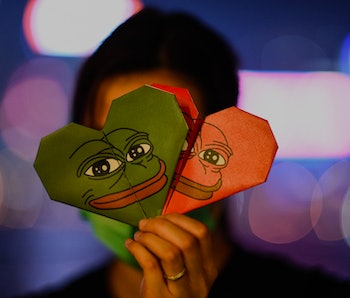 Pepe the Frog isn’t a Nazi. Well, sure, we guess he’s a Nazi sometimes... but only when some really shitty people get ahold of his image. Unfortunately, that’s enough to forever taint the extremely recognizable, smirking amphibian after it mutated into an ironic symbol for the alt-right around the time Donald Trump first descended from his gold-painted escalator into the American political arena back in 2015.

Pepe most certainly never represented anything ideologically or socio-politically abhorrent to its creator, Matt Furie, who first inked the character back in 2005. This fact probably only made it more infuriating to him to watch countless other people profit off his work with horrible motives in the years to come. Recently, Furie has resurrected the frog on his own terms (despite technically “killing” Pepe four years ago) thanks to a new line of original NFTs called PEGZ. And wouldn’t you know it? He’s finally making a ton of money off it in the process.

It’s beginning to look like NFTs maybe aren’t necessarily an entirely bad thing, after all.

PEGZ, plops, and Pepes, oh my — According to Decrypt and the official PEGZ site, Furie will begin releasing 100 limited-edition 1/1 NFT tokens in the weeks ahead, which include a Pepe design every 10 items, along with a “Dazzler” that “plops” after every 30 tokens. Fans can sign up for “PEGZ plops” via Furie’s website now for the latest updates.

Don’t get us wrong: It’s great to see an artist whose work was co-opted by society’s worst people reclaiming his creations for some overdue profit... but man oh man are there still a lot of really sketchy, problematic, classist, and straight-up offensive NFTs thrown into the mix over the past few months.

Hopefully, though, as the NFT fad continues its inevitable ebbing, what’s left will mostly be what the medium was initially created for: artists and creators to get at least somewhat of a better deal when it comes to profiting from their art and content. That, and giving online creeps a well-deserved taste of their own medicine.