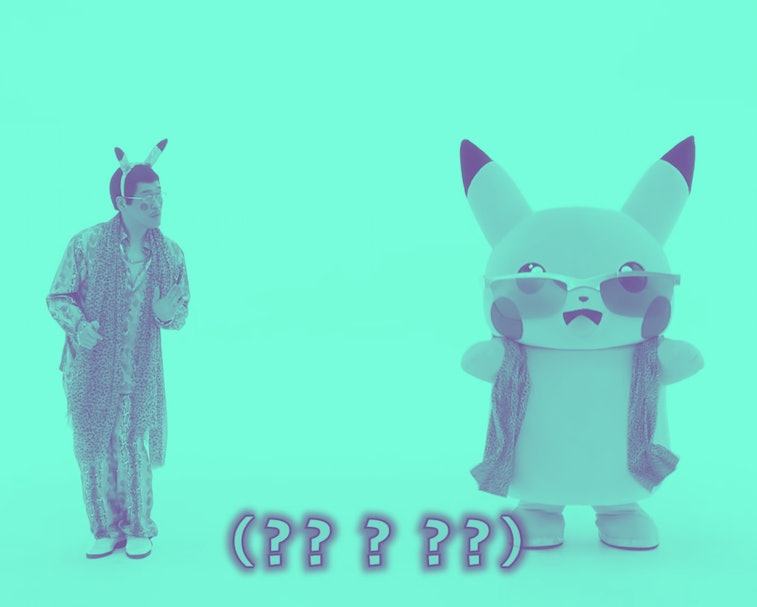 It’s Monday morning, and the world is still a nightmare hellscape. Looking for some fresh music to settle into a new week of soul-crushing, dystopian horror? Well, allow us to introduce you to a duet between the Japanese comedian, Pikotaro, and the Japanese electrically-charged rat, Pikachu. It’s called “Piko to Pika.” You will hate it at first, you will not understand it at all, but you will find yourself mimicking the music video’s dance by the end of the song.

Catchy, right? — You may find yourself with a number of questions after finishing that clip, such as, but in no way limited to:

You are not alone, and we have no answers for you. Such is life, we’re afraid. The only thing we can help explain is this Pikotaro fellow, who is actually named Kazuhito Kosaka and is a Japanese entertainer with a couple of different alter-egos, including this Pikotaro thing. Back in 2016, he released “PPAP,” which stands for “Pen Pineapple Apple Pen,” because sure, why the hell not? It’s similar to “Piko to Pika” in that it’s an equally catchy bit of cute, innocent nonsense that somehow also manages to haunt your dreams. Back in April, he also released an updated version of the song to promote handwashing during the coronavirus pandemic, which still does not atone for his musical sins.

Oh, by the way, did you know Pikachu was almost a tiger with huge breasts for American audiences? That doesn’t exactly relate to this story, but we feel it is thematically similar in its WTF-ness. No word on whether or not a “Piko to Pika” remix is imminent featuring that terrifying-sounding creature.