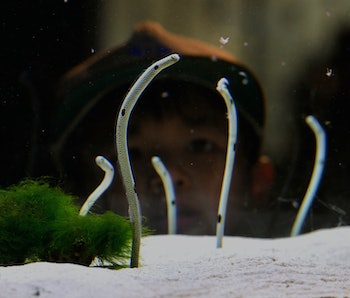 The time has come for us to show up for our fellow Earthlings — will you answer the call? A FaceTime call, that is… with a bunch of tiny eels. Tokyo’s Sumida Aquarium issued an ‘urgent’ message this week calling on quarantined iOS users of the world to help ensure its spotted garden eels don’t forget what it’s like to be gawked at by humans.

What's the point of all this? — These timid wormlike fish make their homes in burrows on the seafloor, poking only the top halves of their bodies out to sway in the current and feast on zooplankton. While in the wild they’d normally recoil into their hideaways when spooked by the presence of a possible predator, aquarium eels have grown accustomed to human visitors and tend to carry on with their business undisturbed.

With ‘stay at home’ orders well underway, though, the eels no longer have that exposure; now, when caretakers go in to check on them, they dart back into hiding. This makes it difficult to assess their wellbeing, the aquarium says.

The roughly 300 spotted garden eels have been cut off from human contact since the Sumida Aquarium closed on March 1. As their isolation continues, they’re only likely to grow warier of people entering their space. Unless, of course, you FaceTime them in the interim.

It's worth a shot — Sumida Aquarium has set up five cameras around the eels’ tank and will be allowing FaceTime calls May 3-5 in hopes to help them get used to seeing human faces again. Head to the aquarium’s website to find out how to dial in — you probably don't have anything better to do, anyway. But if you do, be respectful, keep it brief, and don’t scare the eels.

It's an experimental approach, but we're in desperate times. If this helps the eels regain their trust (or at least tolerance) of human presence, caretakers will be able to continue keeping them healthy and happy.