ProPublica's toxic air exposé will leave you gasping for breath 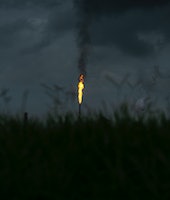 The number of Americans living with an increased risk of cancer from industrial air pollutants.

If you live along a roughly 85-mile stretch of the Mississippi River between New Orleans and Baton Rouge, Louisiana, the odds are alarmingly high that you or someone you know will get cancer related to toxic air pollution. That might read like cynical soothsaying, but it’s hard to consider any other alternative outcome from the information provided in a new, sprawling exposé from ProPublica examining years’ worth of air quality information within the United States.

Employing “advanced data processing software and a modeling tool” designed by the Environmental Protection Agency, researchers were able to map how cancer-causing chemicals emitted by thousands of industrial plants and refineries spread across the country, then focus in on certain key regions and their populations. The results, while depressingly unsurprising, are still a gut punch: Census areas where the majority populations are people of color often see 40-percent more carcinogenic air than majority-white regions. “In predominantly Black census tracts, the estimated cancer risk from toxic air pollution is more than double that of majority-white tracts,” explains ProPublica.

It’s worth reminding everyone here that, instead of actually tackling the problem, billionaire industrialists would rather just relocate these “sacrifice zones” in space.

Check your own location — For an extra dose of reality, feel free to utilize ProPublica’s mapping tool to see your home in relation to the country’s most toxic regions. While many might (problematically) assume these trouble areas are only in impoverished or distant locations, this often isn’t the case. Portions of Houston (population 2.3 million), for example, fall within a particularly hazardous area.

“Large swaths of the Greater Houston area make up the third-biggest hot spot of cancer-causing air in the country,” ProPublica explains. “... For many homes closest to the fence lines of petrochemical plants in cities like La Porte and Port Neches, Texas, the estimated excess risk of cancer ranges from three to six times the level that the EPA considers acceptable.”

Invisible data — Like many of the actual toxins, the data surrounding these areas is hard to obtain, and often somewhat misleading. As the report notes, instead of tracking the cumulative effect of these pollutants, the EPA looks at individual chemical plants, refineries, and shipyards, which can vastly underestimate the dangers in any given region.

More like this
Andrew Paul
5.3.2022 8:02 PM
Bad Medicine
CDC bought phone data to track millions of Americans during quarantine
Andrew Paul
5.11.2022 7:50 PM
Iconic
This summer’s vibe is a $400K Zillow listing collapsing into the ocean
Will Gendron
5.12.2022 12:00 PM
Yikes
El Salvador's bet on bitcoin has been as volatile as expected