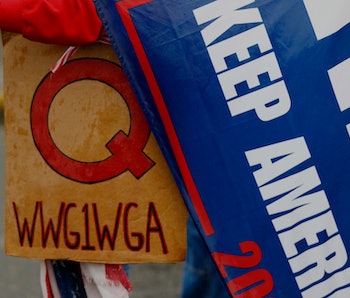 Twitter has begun banning thousands of accounts related to the far-right conspiracy network, QAnon, in a sweeping crackdown on misinformation and abuse. The company announced the move in a thread of tweets Tuesday evening, saying it’s targeting accounts that “we know are engaged in violations of our multi-account policy, coordinating abuse around individual victims, or are attempting to evade a previous suspension.”

In addition to outright banning the most harmful accounts, Twitter says it will bar QAnon content from Trends and recommendations moving forward, and block shares of all QAnon-associated URLs. Roughly 7,000 accounts will be permanently suspended as a result of the decision, and another 150,000 quieted through tightly-limited circulation, a spokesperson told NBC.

The changes, detailed in Twitter's statement below, will begin going into effect this week.

We’ve been clear that we will take strong enforcement action on behavior that has the potential to lead to offline harm. In line with this approach, this week we are taking further action on so-called ‘QAnon’ activity across the service. We will permanently suspend accounts Tweeting about these topics that we know are engaged in violations of our multi-account policy, coordinating abuse around individual victims, or are attempting to evade a previous suspension — something we’ve seen more of in recent weeks. In addition, we will: No longer serve content and accounts associated with QAnon in Trends and recommendations; Work to ensure we’re not highlighting this activity in search and conversations; Block URLs associated with QAnon from being shared on Twitter. These actions will be rolled out comprehensively this week. We will continue to review this activity across our service and update our rules and enforcement approach again if necessary. As we work at scale to protect the public conversation in the face of evolving threats, we’ll continue to lead with transparency and offer more context on our efforts.

The problem is getting more real — QAnon has leapt out of the fringe conspiracy corner over the last two years, now being popular enough to be part of the current political conversation. It outwardly counts at least 15 Congressional candidates among its followers, and dozens more that have not made it to the ballot. The theory at its heart pushes the narrative that a "deep state" entity has been quietly working to take down the Trump administration — and, of course, that Democrats are behind and covering up a massive child sex abuse ring.

Followers of the conspiracy have taken it far beyond the act of pushing false information, though, channelling it through to online harassment and, in some cases, real-world violence. Apparently Twitter has just now decided enough is enough.

But Twitter’s history of handling harassment and misinformation has been rocky at best. For years users have demanded the site get a grip on the presence of neo-Nazis and dangerous conspiracy theories that thrive on its site, but only recently has it started taking meaningful steps toward… anything to that end.

The company finished out last year with an announcement that it had dismantled huge networks known to be pushing misleading political propaganda to an audience in the tens of millions, and began 2020 trying to get a handle on misinformation relating to the COVID-19 pandemic. It's only cracked down further in subsequent months. Twitter's decision to finally slap a "get the facts" label on one of Trump's tweets earlier this summer, though, marked the biggest departure yet from the hands-off attitude it previously hid behind.

It doesn't end here — With every ban comes the immediate efforts to thwart said ban, and QAnon followers are already one step ahead of Twitter, using tactics like substituting QAnon-related phrases with the number "17." The company told NBC that this type of activity is on its radar and will be handled using both human moderators and machine learning — but if its past attempts at wrangling online abuse are anything to go by, Twitter's really going to need to step up its game.