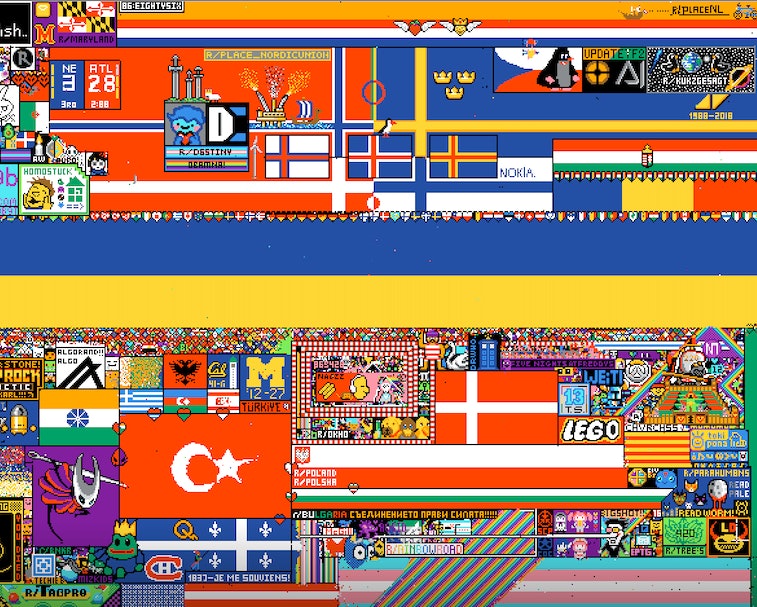 This morning, when the project began, all pixels in the project were white and until midnight ET on April 5, redditors can add a single pixel to the 1000 x 1000 grid. Each account can alter just one pixel every five minutes so that no single person could dominate. Right off the bat, alliances formed. For some reason, r/Place activates a certain tribalism in people that makes them scramble for any symbol that gives them a source of identity and plaster it onto a big, meaningless map. It’s stupid, it’s beautiful, it’s the internet in all its glory.

This must be the r/Place — Fans of a popular rhythm game called “osu!” coordinated very well to quickly deploy a circular logo. A Nordic Union emerged with three small flags for Iceland, Faroe Islands, and Åland. Tiny pixel art peppered the screen before a massive, and I mean gigantic, Ukrainian flag utterly bulldozed a horizontal stripe in the middle, making it clear how the most r/Place enjoyers feel about the Russo-Ukrainian war.

There is strongly-worded anti-NFT sentiment, shoutouts to favorite online creators, and a Gamestop logo with the words “Powa to the layers!!!!!” It’s got logos galore — for Lego, Elden Ring, and the University of California Berkeley. When a curse word emerged near the University of Michigan block M logo, some worried that it was coming from longtime rival the Ohio State University. But then someone messaged that the word was coming from the hydration enthusiasts at r/HydroHomies who were planning to write “fuck Nestle.”

So, add a pixel to the big, ever-changing internet masterpiece. On April Fool’s Day, the internet tends to be at is at its most annoying with canned corporate stunts and confusing pranks. But this experiment— where people from all over the world add single pixels for no real reason at all— can remind you of the power of humanity to band together with strangers to make little pixelated shapes, to make something out of nothing.