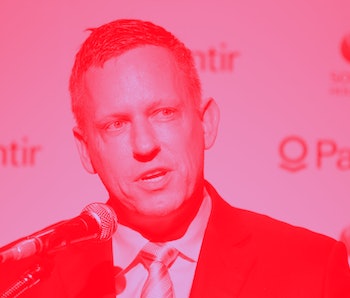 Mark Zuckerberg’s friendship with Facebook investor and Donald Trump advisor Peter Thiel is sowing seeds of discord with high-ranking company executives. The Wall Street Journal revealed a growing divide in Facebook’s senior leadership fueled by Thiel’s conservative influence. Some board members and executives are strongly against the current political ad policy and favor alternate options including banning them altogether.

Thiel’s spiel — WSJ sources claim that Zuckerberg’s unwavering resolve to waive fact-checking on political ads comes from Thiel. In October, Thiel and Zuckerberg had a private dinner with Trump at the White House. This and other secret meetings with conservatives prompted a wave of backlash from Democratic politicians when revealed in November.

“Mark is friends with Peter Thiel and a lot of Republicans,” a former Facebook employee told the WSJ. “It’s a reality people aren’t willing to accept.”

Thiel’s reach doesn’t just color Facebook’s relationship with politicians; there was a time he was believed to be involved in the Cambridge Analytica scandal. Thiel is the founder and chairman of Palantir Technologies Inc., a database creation and analysis firm named by one of the Cambridge Analytica whistleblowers. Palantir denied any involvement and an investigation pushed by both Zuckerberg and COO Sheryl Sandberg came up clean.

“Facebook feared that his status as a prominent Trump supporter and a board member at both companies would make any violation discovered especially damaging,” according to a WSJ source.