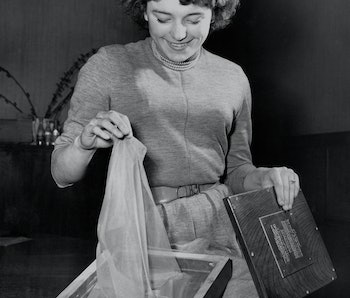 Sustainable fashion could get a major boost thanks to scientists at the University of Edinburgh. A team of researchers was able to modify the genetic code of the infamous bacteria, E. coli. (yep, that E. coli) to yield a key ingredient in the production of nylon. It took a good deal of experimentation to create the precious industrial chemical known as adipic acid.

The genetically altered bacteria was kept in liquid solutions that carried guaiacol, a component known for providing plants their physical structure. It can also be found in essential oils derived from lemon and orange skins. After an incubation period, that mix ultimately led to the production of adipic acid — in a process that didn't emit the typically present greenhouse gas, nitrous oxide. That's excellent news for anyone interested in sustainable industrial production of clothing, parachutes, household furniture, and more.

Subtract nitrous oxide and we're good to go — As it stands, nitrous oxide is a gas that packs a greenhouse effect thrice that of carbon dioxide. The pollutant is awful for the environment, which makes it all the more important to figure out a way to cut it from the production process.

"I am really excited by these results. It is the first time adipic acid has been made directly from guaiacol, which is one of the largest untapped renewable resources on the planet," said Jack Suitor of the University of Edinburgh. "This could entirely change how nylon is made."

Imagine what factory production could look like if the approach is applied more broadly. Stephen Wallace, the principle researcher of the study, explains the potential of such a strategy:

If bacteria can be programmed to help make nylon from plant waste – something that cannot be achieved using traditional chemical methods – we must ask ourselves what else they could do, and where the limits lie. We are all familiar with the use of microbes to ferment food and beer – now we can ferment materials and medicines. The possibilities of this approach to create a sustainable future are staggering.

At this moment, we don't see a ton of sustainable fashion involving nylon. Sure, Burberry designed a deer print jacket out of recycled nylon, and it was easy on the eyes, but it wouldn't hurt to introduce these new methods at a much broader and deeper scale. A world where fashion doesn't compromise environmental health? That sounds refreshing.