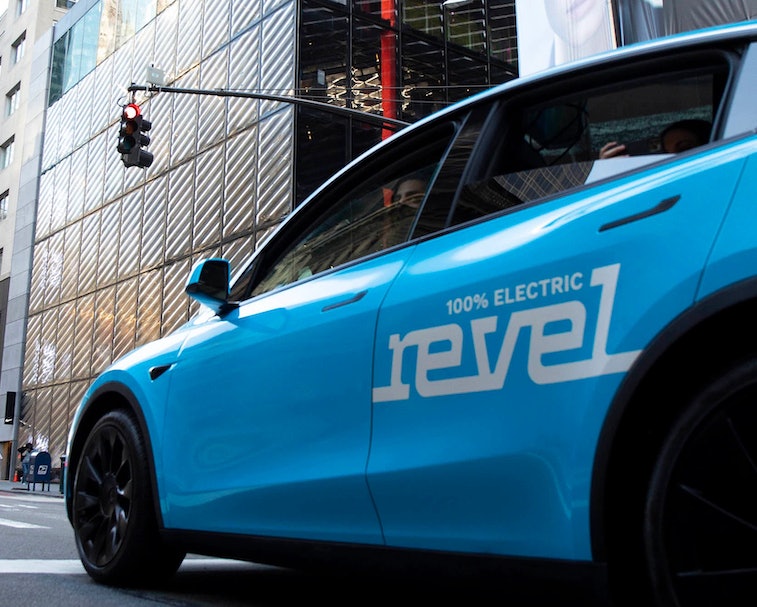 Manhattan’s residents will soon see a fair number more Teslas on the island’s already crowded streets. Revel, the electric mobility company best known for its sometimes-fatal moped rental service, has received approval to begin a taxi service full of Teslas in New York City. Because the solution to all of the Big Apple’s problems is… more cars?

The approval of this new ridesharing fleet proved no small feat for Revel. The company has been locked in an ongoing regulatory battle with NYC’s Taxi and Limousine Commission for months now. The hold-up was related to a slew of new regulations introduced in 2019 by Mayor de Blasio to slow down the electric vehicle ridesharing market, Gothamist reports.

Revel fought against this pushback by claiming its taxi service would be entirely different than Lyft and Uber in that it would not treat them as gig workers and would instead make them full-time employees. This would give Revel drivers access to paid time off and sick days, amongst other benefits — and the company wouldn’t even require drivers to lease or buy their vehicles.

The city’s now taken the bait and given Revel the go-ahead to begin rolling out the Tesla fleet. The bright blue Teslas will finally be able to clog up Manhattan streets in just a few short weeks.

A limited start — Much like with its recently launched subscription e-bike service, Revel is taking things slow with its taxis. The company plans to release just 50 Tesla Model Ys into the wilds of Manhattan next month. Those initial taxis will only pick up and drop off customers below 42nd Street, the company said.

“With a limited fleet, we need to limit our service area to a smaller area where we know there’s going to be demand,” said CEO Frank Reig. “Once we’ve established what the utilization patterns and data look like, we can consider growing into other neighborhoods and boroughs.”

Does it outweigh the bad, though? — As part of its debate with the Taxi and Limousine Commission, Revel also agreed to install electric vehicle charging stations around the city and leave them open for public access. If you haven’t noticed by now, this is Revel’s entire pitch: that adding a fleet of Teslas and chargers will better the lives of New Yorkers.

With a product like electric mopeds, which do actually create a new method by which New Yorkers can get around the city, this altruistic bend is a little easier to swallow. But adding more cars to a city already positively inundated with them? In the most crowded parts of that city, no less?

Uber and Lyft both use incredibly problematic business models, and, yes, the 125 drivers Revel plans to hire will make out much better than gig workers who work for either of those platforms. But adding 50 Model Ys isn’t going to change that; it’s just going to make the streets even more crowded and the competition stiffer for the city’s many existing cab and rideshare drivers.