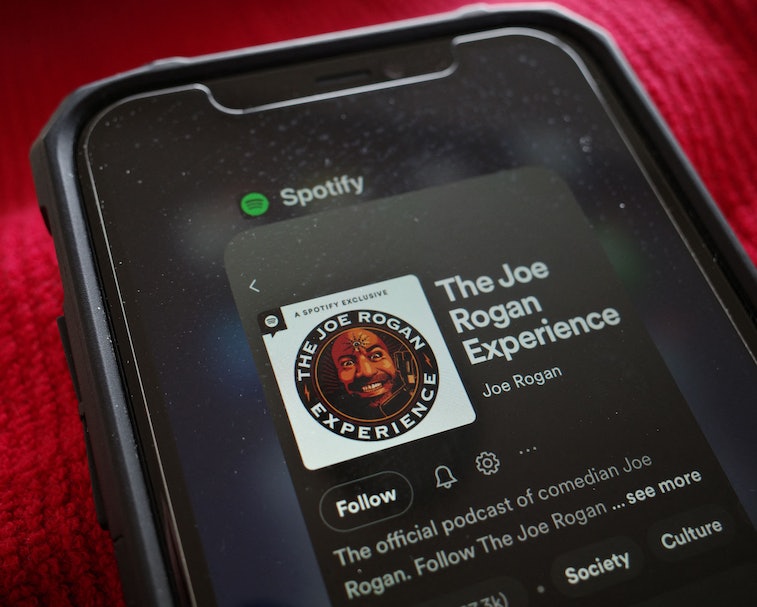 Rumble, a YouTube competitor popular among conservative politicans and public figures, is offering Joe Rogan $100 million to leave Spotify for its platform. “We stand with you, your guests, and your legion of fans in desire for real conversation,” wrote Rumble’s CEO Chris Pavlovski on Twitter. “How about you bring all your shows to Rumble, both old and new, with no censorship, for 100 million bucks over four years?”

“All your shows” presumably includes the 113 problematic episodes that Joe Rogan removed since last Friday according to a tracking site dedicated to the Joe Rogan Experience. The removed episodes contain repeated use of the n-word and one instance where Rogan compared a black neighborhood in Philadelphia to Planet of the Apes. A compilation of particularly egregious clips was posted by musician India Arie.

Over the weekend, Rogan apologized in a video, saying he meant to compare the neighborhood to Africa, adding that the incident was “the most regretful and shameful thing I’ve ever had to talk about publicly” and that the compilation video looks “horrible, even to me” — a pretty absurd clarifier. He also shared that he’s learned over the years that “it’s not my word to use” and that he “clearly [has] fucked up.”

In light of the resurfaced racism, The Rock reconsidered his initial support for Rogan.

The offer from Rumble appears to match the deal that Rogan struck with Spotify in May 2020 which was reported to be $100 million (although the exact terms and length of Rogan’s contract are not clear). Spotify’s long-simmering fiasco with Rogan started heating up at the beginning of the year and CEO Daniel Ek is sorry about Joe Rogan, but not sorry enough to remove his show.

“There are no words I can say to adequately convey how deeply sorry I am for the way The Joe Rogan Experience controversy continues to impact each of you,” Ek writes, before adding that he does “not believe that silencing Joe is the answer.” Instead, Ek announced Spotify is committing another $100 million “incremental investment” to music and content from “historically marginalized groups.”

Who’s ready to Rumble? Founded in 2013 and based in Toronto, Rumble gained traction in 2020, exploding from 1.6 million monthly users to 31.9 million by the end of the first quarter of 2021. The site is popular among right-wing figures like Sean Hannity, Alex Jones, and Republican lawmakers Devin Nunes and Jim Jordan. Rumble previously struck deals with Tulsi Gabbard and Glenn Greenwald as part of an effort to invest in personalities that “challenge the status quo.”

How deep are Rumble’s pockets? The site has attracted prominent investors like Narya Capital, the group venture capitalist Peter Thiel and Hillbilly Elegy author JD Vance. In May 2021, Wall Street Journal reported on the transaction, writing that “people familiar with the matter say it values Rumble at around $500 million.” On Twitter, Ted Cruz expressed support for Rumble’s offer, saying that Spotify, “gives in to the mobs. Cowards.”