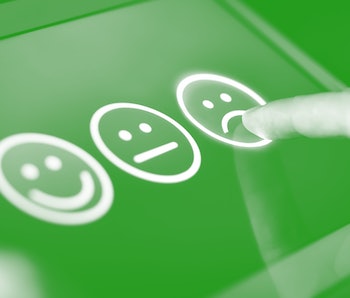 Google confirmed to multiple outlets it’s removing negative reviews for the Robinhood app on the Play Store, as first reported by 9to5Google. The app’s rating fell all the way down to one star before rebounding to a nearly four-star rating on Thursday, but has backslid to 3.4 stars. On the App Store, Robinhood’s rating held at 4.7 on Thursday, and as of this writing, it’s only gone down to 4.5, but thousands of users are currently petitioning Apple to remove it from the App Store entirely.

Protections gone haywire — While Apple has remained tight-lipped about this situation, Google is owning up to removing the negative reviews. Gizmodo reports that a Google spokesperson pointed to rules about “coordinated or inorganic reviews,” but it stopped responding when pushed on what constituted "inorganic" in this instance. A Google spokesperson told Input its systems pull reviews believed to be spam, agnostic of rating or content, and pointed to one-star reviews from the past 24 hours that are still visible.

Google also underscored that developers cannot alter ratings in the Play Store. Several iOS developers have tweeted that this is also impossible in the App Store.

The “coordinated” part has some weight to it, as the internet has rallied behind r/WallStreetBets this week. While many affected users were enraged by the company’s response to the collective trading efforts of the subreddit, there’s undoubtedly room for newcomers to download the app in order to leave a negative review.

A delay in when reviews appear in the App Store appears to prevent these reviews from seeing the light of day for iOS users. Many are taking the absence of these reviews as evidence of suppression. Apple hasn't responded to Input’s inquiries about whether it's been trying to separate legit criticism from spam reviews.

Another misunderstanding? — r/WallStreetBets vs. Wall Street has pulled Robinhood and other retail investor platforms into the middle of a class war. While it appears that Robinhood has sided with Wall Street hedge funds, more than anything, it appears to be siding with itself.

The company has mainly come under fire for its trading halts and even selling of users’ stocks at lower share prices, both of which can occur in a traditional investing setup. A risk-based haircut protects both the investor and the broker from covering margin calls. The base level of Robinhood trading uses a margin account, and despite claiming it has no liquidity issues, the company has raised $1 billion in order to cover its cash demands. TLDR; Robinhood never thought plebes would make this much money and is now scrambling to cover itself.

Trading halts could even be protected by its terms, limiting the efficacy of class action suits brought against it this week. The truly nefarious issue with the most clear-cut organic rage, however, comes from whether its trading halts benefitted its partner Citadel Securities, which Citadel has denied.

Is this all specious and worthy of investigation? Absolutely, but it’s not the David and Goliath scenario many want it to be. While some hedge funds suffered, others rode the wave alongside consumers and pocketed fortunes. Expect plenty of attention and scrutiny from regulators in the months ahead.