“I would be delighted to do it. It can be arranged, and we can talk through the magic of Cameo.” 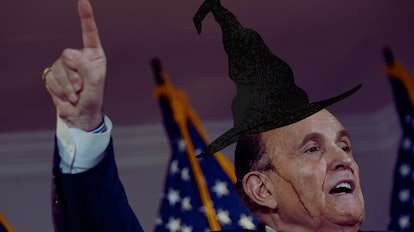 Late Monday night, or very early Tuesday morning depending on how you look at it, Rudy Giuliani — New York City former mayor, Donald Trump’s former attorney, and Borat’s daughter’s former suitor — took to Twitter to announce he had joined Cameo, the app where people can pay somewhat-to-marginally famous people to record brief shoutout videos, birthday tidings, and Sugar Ray breakups. To be more specific, the former mayor of New York City tweeted his update at exactly 2:58 a.m. EST, just two minutes before the commencement of what many consider to be the Witching Hour.

His first message on the app is brief, as most Cameo videos are, and we have transcribed it entirely with the pertinent section highlighted below:

Hi, it’s Rudy Giuliani, and I’m on Cameo. If there’s an issue of concern that you want to discuss, or a story you’d like to hear or share with me, or a greeting that could bring to someone that would bring happiness to their day, I would be delighted to do it. It can be arranged, and we can talk through the magic of Cameo.

Hmm. Now, one could assume that the disbarred lawyer and, we feel it is our duty to repeat, guy who once tried to fuck Borat’s daughter, decided to create a Cameo account in the drunken, dead of night in a terrified, desperate bid to scrape together additional funds while his entire empire constructed from papier-mâché Weekly World News clippings dissolves around him. One could assume that. Or, bear with us, could he be so on-the-ropes that he is now resorting to dark arts and the occult to survive his coming legal onslaught? Let’s assess.

He’s talked about a ‘witch hunt’ for years — After all, Giuliani has been wailing about witch hunts for the past five years... perhaps we weren’t reading between the lines closely enough? “Does [using witch hunt] offend me as a witch? No. Does it offend me as a decent human being? Yes,” one actual witch, Dakota Bracciale, told Time regarding Giuliani’s word choice in 2019. “Because what this is is basically just textbook gaslighting, this is the abuser, the aggressor dressing themselves up in the language that is used to refer to the victims of their aggression.”

Now, obviously, that is the most logical reason. But then again...

Perspiring black liquids from his head — Remember that whole incident last fall? Most of us chalked it up to Giuliani’s sad, hasty attempts to mask his ghoulishness. Our investigation into historical accounts of dark arts spells resulting in black, oily substances leaking from one’s head turned up very little, but we did find this “black art oil for curses, hexes, black magic, necromancy, and communing with the dead” for sale. Maybe Giuliani found $7.75 between the couch cushions in his sex dungeon or whatever, and got a vial because he’s got nothing left to lose?

Really, the jury is still out on this one, which is ironic given the legal nightmares Coven Brother Giuliani is staring at over the next couple of years. In the end, we can neither confirm nor deny the man is dabbling in necromancy, although the skin that constantly seems to be rushing to leave his face makes a good argument in favor of our theory. In any case, we’ve reached out to Giuliani for comment, and will update accordingly.