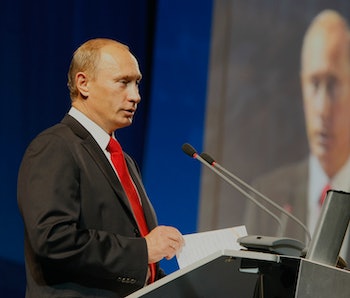 With an increasing number of Western companies ceasing business with Russia, residents of the country are running out of options for accessing entertainment from the rest of the world. The Russian government has, for that reason, declared piracy legal, freeing individuals and Russian entities from patent law.

Rumor of Kremlin discussions to loosen piracy laws while sanctions continue first surfaced earlier this week. A government document entitled “Priority Action Plan for Ensuring the Development of the Russian Economy in the Conditions of External Sanctions Pressure,” viewed by TorrentFreak, proposed legalizing unofficial software downloads for which there is no Russian alternative, for example. Other Russian political discussions proposed re-opening RuTracker, a very popular torrent site that’s long been blocked by Russian ISPs.

Now local Russian media reports that the Kremlin has given Russian companies the go-ahead to use intellectual property from outside the country without paying patent holders. Which is to say: in regards to piracy, the Russian government’s official stance is sure, go for it.

IP à la carte — Because the flow of news in and out of Russia is severely limited at the moment, figuring out the extent of the Kremlin’s new pro-piracy stance is tricky. We know about the proposed legislation, for example, but that only explicitly covers productivity software. Any other allowances — for TV shows or video games, for example — are only implied, as far as we know.

Government-backed newspaper Rossiyskaya Gazeta first tweeted about the proposed legislation on March 3, including a note that politician Dmitri Ionin had asked the state to unblock RuTracker so they could download Hollywood movies. The same publication now reports that the Kremlin has accepted the proposal.

“This will smooth out the impact on the market of breaks in supply chains, as well as the shortage of goods and services that arose due to new sanctions by Western countries,” Russia’s Ministry of Economic Development told local reporters.

But the internet — As long as Western publishers refuse to do business in Russia, the country’s residents have no way of accessing the Western world’s wealth of media without utilizing piracy. Citizens would have turned to torrents whether or not they’d been legalized.

If anything, actually accessing the internet may pose more of a problem to Russians than intellectual property. Last week, U.S.-based internet carrier Cogent Communications pulled out of Russia in an effort to stop its networks from being used for cyberattacks or for spreading propaganda. Lumen, another American ISP, said this week it would do the same.

Whether or not piracy is legal, Russians will be unable to access any media at all without internet access. Or news, for that matter.