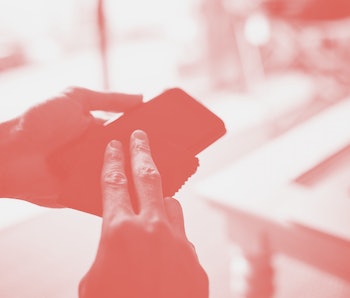 Apple’s $19 polishing cloth is probably the funniest product we’ve ever seen the company create, but a few weeks after its release it’s mostly fallen off our radar. There’s kind of a lot to worry about in the world right now, you know?

Samsung apparently hasn’t stopped thinking about the ridiculously-priced square of fabric just yet. The much-mocked cloth is now the subject of a pithy little Samsung ad in Germany. German publication Galaxy Club spotted the ad on the Samsung Members app.

The ad pokes fun at Apple’s cloth in a pretty roundabout way. Here’s the full text of the ad, as provided by Google Translate:

The Samsung Galaxy care cloth: 20 x 20 cm and velvety soft. It cleans the display of your Samsung Galaxy or other surfaces such as B. Monitors. It is available free of charge for you as a Samsung member.

Click on "Register now", follow the further steps of the registration and if you are one of the first 1000 participants, you will receive a Samsung Galaxy cleaning cloth in the mail after your data has been successfully checked.

Too late — If you’re reading this message now, it’s already too late to grab one of Samsung’s free cloths. The promotion has been removed from the Samsung Members app in Germany, according to Galaxy Club. Most likely that means all 1,000 cloths have been claimed.

It’s unclear whether or not Samsung will be giving these out in any other markets around the world. To be fair, there are plenty of other companies selling microfiber cloths like this one for dirt cheap — it just won’t be as fun without Samsung handing you one to take a jab at Apple.

But it’s a special cloth — Apple’s reasoning for creating the cleaning cloth makes sense, in a way. The cloth, which was added to the online Apple Store following the most recent Apple event, is meant to be used with Apple’s ultra-delicate “nano-textured” glass, a premium screen option for the Pro Display XDR and the new M1 iMac. The cloth’s “soft, non-abrasive material” is supposedly safer for use on these fancy screens than regular soft, non-abrasive cloths.

Right now the cloth is actually a little difficult to get your hands on. It has apparently sold so well that the current estimated delivery date to New York City is between January 11 and January 25. Not even in time for the holidays.

Never afraid of a little banter — We’re not even a little surprised by this little move from Samsung. The company’s never shied away from using a bit of tongue-in-cheek humor to promote its own products. When Apple decided to nix the free charging adapter in the iPhone 12 box, Samsung put out ads the very same week mocking the decision.

But then Samsung went and removed the charging brick from its own box! This happened back in 2019 when the iPhone X removed the headphone jack for good, too. In both cases, Samsung later removed the ads.

It’s a strange marketing move to make this many times, to be sure. But it’s also pretty fun to watch.