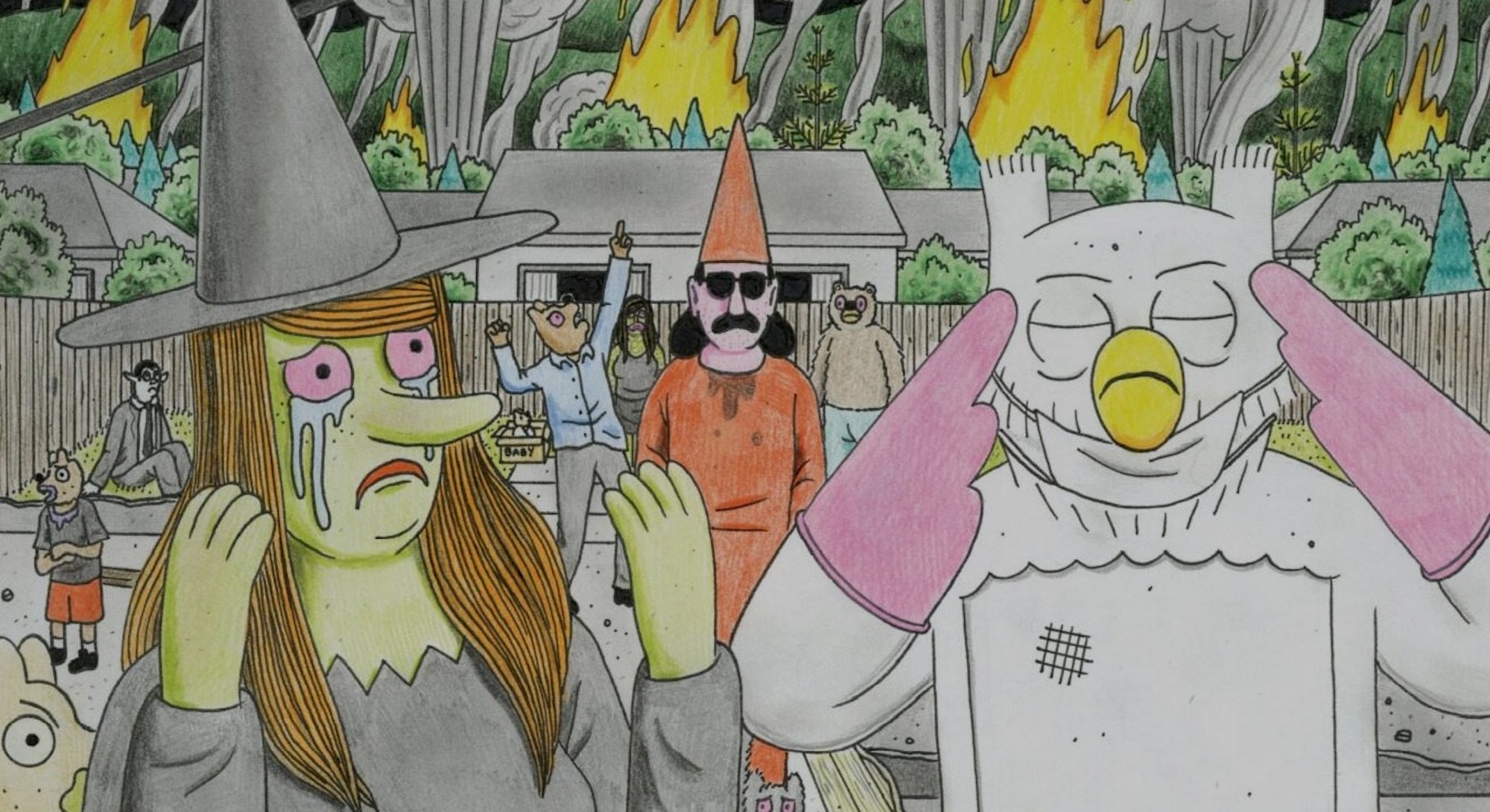 March 13, 2020: Megg, a depressive witch with a weed addiction, is watching TV with Mogg, a cat who is also her boyfriend, and their roommate, a neurotic owl named Owl, when the news breaks: Businesses across the country will shut down due to COVID-19.

“Oh, God,” she says. “My Animal Crossing preorder!” Owl gives her an exasperated look and tries to explain that a Nintendo Switch game is the least of her worries, but she’s not listening.

This was the first 10-panel installment of Crisis Zone, the Instagram comic that catapulted writer and illustrator Simon Hanselmann to new levels of cult renown over the course of its 285-day run. Due out as a print anthology from publisher Fantagraphics in August, it’s the latest entry in Hanselmann’s long-running “Megg and Mogg” series, about a group of terminally unemployed degenerates and their drug-addled misadventures.

Previous books like Bad Gateway and One More Year were heavily autobiographical, using dick jokes and Jackass-style slapstick to hook readers into serious stories about depression, codependence, and addiction. But for Crisis Zone, Hanselmann turned to the 2020 news cycle for inspiration: the global pandemic, mass civil unrest, a failing state, and the looming threat of being canceled, all of which he processed in real time via daily slideshow posts. By bringing a centuries-old medium into the social-media age, Hanselmann created what could well be the definitive alternative chronicle of the first nine months of the pandemic in the U.S.

Looking back on posts from March and April is like reading a diary from several lifetimes ago, full of memories that we’ve long since repressed. Remember the panic-buying phase? On March 24, Owl drags a hysterical Megg to the grocery store, where the only pasta left is whole wheat (“Gross! Fuck off!”), and Megg buys adult diapers because there’s no more TP. Meanwhile, Mogg can’t stop watching conspiracy videos on YouTube, and is convinced that the Boogaloo Boys are about to start a civil war.

Werewolf Jones, a libertine who only turns human when he’s sober, joins their quar pod and starts doing cam shows where he fits comically large items in his butt. When the videos go viral, Netflix producers come knocking, and the housemates sign a deal for a Tiger King–style reality show called Anus King.

For Hanselmann, using current events as plot fodder was a way to metabolize the news cycle without freaking out about it. “We all needed something to focus on,” the 40-year-old cartoonist says via video chat from his home in Seattle, where he is wearing the long strawberry-blonde wig he puts on for public appearances. (Hanselmann has been crossdressing since he was five). “You know, candle-making, learning the guitar, bread-baking — or drawing transgressive alternative comics.”

And because the unfolding events of 2020 provided him with so many “free ideas,” he could focus on powering through the insane task of writing, illustrating, and posting 10 comic panels a day. Hitting his daily goal required 14-hour work days, which he “fucking loves,” but is also a “horrendous burden.” It also required a switch from sumptuous, time-intensive watercolor to colored pencil.

Hanselmann says he doesn’t want to come off as “some creepy edgelord.”

Responding to news in real time allowed him to do social commentary in a way he couldn’t with previous Megg and Mogg books. The name Crisis Zone is a reference to an earlier comic of his called Truth Zone, which satirizes various scandals and controversies in the world of underground comics. When COVID-19 hysteria started to mount, he decided to turn that approach outwards to, well, everything.

As a result, Crisis Zone reads a bit like an anthropological study of the American id. Over the course of the series, Hanselmann (who is Australian), takes on the most embarrassing aspects of U.S. culture — guns, extremism, reality shows — while extending a more nuanced treatment to the emotional issues his characters are experiencing. Over the course of the series, multiple star characters come out as trans (Mike becomes Jennifer; Werewolf Jones’ child Diesel becomes Desi).

We witness not only those characters’ journey towards wholeness, but their friends’ journeys towards acceptance and understanding. “I wanted it to be like seeing your friend go through that,” Hanselmann explains, “and I wanted to challenge people who might not have experienced a friend transitioning.”

By lampooning both sides of the political divide — from QAnon conspirators to Oregon’s leftwing gun nuts — Hanselmann walks a razor’s edge of political incorrectness. He knows how close this sounds to the South Park approach of “making fun of everything,” but he says he doesn’t want to come off as “some creepy edgelord” looking for chaotic lulz.

In June, he started writing an absurdist action-movie subplot involving a mass murder and a kidnapping, which leads the gang to venture out into Seattle’s Capitol Hill Autonomous Zone, or CHAZ, in search of Werewolf Jones’ lost child. There are black-clad leftist militants smashing cop cars, smoldering buildings covered in ACAB graffiti, and at one point, a dog is seen pooping in the CHAZ community garden. “I felt kind of bad portraying it as a fruitless endeavor,” he says of CHAZ, “even though it ultimately was.”

Hanselmann’s Instagram followers, who grew from roughly 30,000 to 110,000 between March and December, have no problem telling him when they think he goes overboard. “Someone in the comments was like, ‘I hope you’re happy with your new audience of alt-right and Nazi readers,’” he says. “I was like, I doubt those people would be actively enjoying a comic with, like, four trans characters and a werewolf constantly shoving things into his rectum. But if they are, maybe they’ll develop some empathy.”

Before Crisis Zone, Hanselmann always said he hated web comics, and he mostly used Instagram to promote his books. But he’s come to appreciate the instant feedback loop between him and his fans. Acolytes from all over the world leave comments saying they wouldn’t have made it through the year without Crisis Zone. They also love to guess what happens next. On a couple of occasions, he had to rewrite the story arc because some eagle-eyed commenter successfully guessed the next plot twist.

But generally, he says, the ideas that emerge from his head are so unhinged that he manages to stay one step ahead. As Crisis Zone enters its final act, for example, Werewolf Jones realizes how toxic Anus King has become for everyone involved — and decides to force Netflix to cancel it by applying blackface in front of the cameras. “I don’t think anybody would have predicted that that was the avenue I would take,” Hanselmann laughs.

Though the series officially ended on December 22, Hanselmann is still working 14-hour days to get the print anthology ready. He drew 500 additional panels in the last month, then did touch ups on the existing ones, and is now preparing a 30-page accompanying text, plus an epilogue to round it all out. By the end of February, he’ll finally be able to step away from the drafting table and dedicate time to his next big project: his son, who will be born toward the end of 2021.

After that, he’s got several more books outlined, including Megg’s Coven, a sequel to his more autobiographical book Bad Gateway, in which he uses Megg as an avatar to explore his troubled family history and its attendant mental illnesses. Hanselmann says he is looking forward to putting down Crisis Zone — the “news-based penis comic,” as he calls it — to get back to what he does best: “writing about drug addicts and their personal crises.”