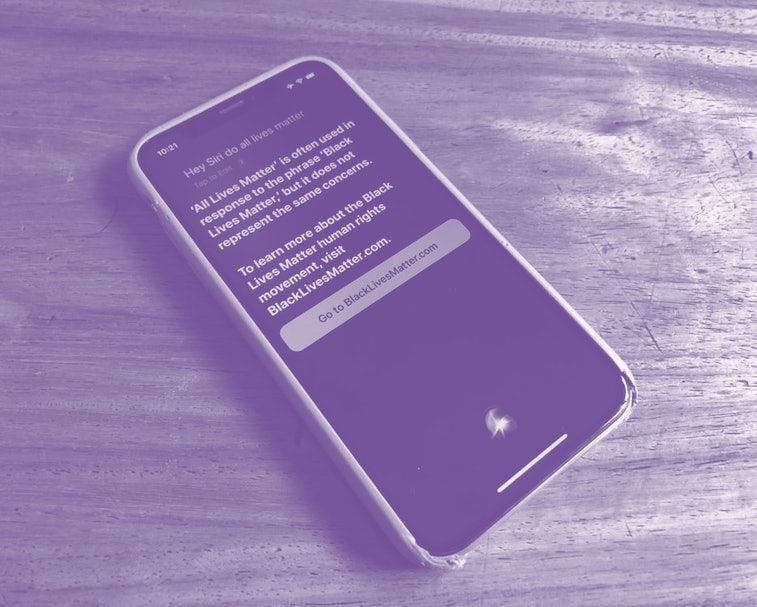 Google and Apple have trained their respective virtual assistants to refute the statement “all lives matter,” as spotted by Business Insider. It’s another small but meaningful statement by some of the world’s largest tech companies, though its efficacy is likely low for those who actually need to better understand the statement.

Both Siri and the Google Assistant have developed a newfound wokeness, at least in this one arena. Sports editor David Gardner tweeted a video of himself asking his Sonos speaker both “Do Black lives matter?” and “Do all lives matter?”

As protests sparked by George Floyd’s murder continue across the country (and the world), companies are being forced to reckon with their own silence as being complicit in systematic racism. Though concrete action like donating to bail funds and contacting lawmakers is paramount to affecting change, speaking out is important, too — especially with platforms large as these.

Black lives matter — Google Assistant’s response to “Do Black lives matter?” is knowledgeable if also narrow: “Black Lives Matter. Black people deserve the same freedoms afforded to everyone in this country, and recognizing the injustice they face is the first step towards fixing it.”

Siri has a similar response: “All Lives Matter is often used in response to the phrase ‘Black Lives Matter,’ but it does not represent the same concerns.” This response also contains a link to the Black Lives matter website.

Alexa needs to catch up — Piya Chattopadhyay, a radio host for CBC, tweeted a similar video using Amazon’s Alexa. Alexa’s responses were similar to those programmed into Siri and Google Assistant: “Black Lives Matter. I think people deserve to be treated with fairness, dignity, and respect.” The same bland response is given when Alexa is asked about either Black Lives Matter or All Lives Matter.

Big tech is all about speaking up; Apple CEO Tim Cook, for example, wrote a long post on the company’s website dedicated to Apple’s stance on the ongoing protests. Talking about this as a problem is good, but it’s not enough. Speaking up without concrete action attached to it can only do so much — and how many people are asking their virtual assistants for advice about race, anyway? Open your purses, Big Tech; then maybe we’ll believe your commitment.

More like this
Andrew Paul
5.9.2022 3:20 PM
Deep
Kendrick Lamar's new video deepfakes him into Kanye, Kobe, and O.J.
Raymond Wong
5.11.2022 6:00 PM
Google I/O 2022
Finally, you don't need to repeat 'Hey Google' over and over on your Nest Hub Max
Andrew Paul
22 hours ago
For Your Health
Cerebral realizes pushing benzos on TikTok is bad, actually