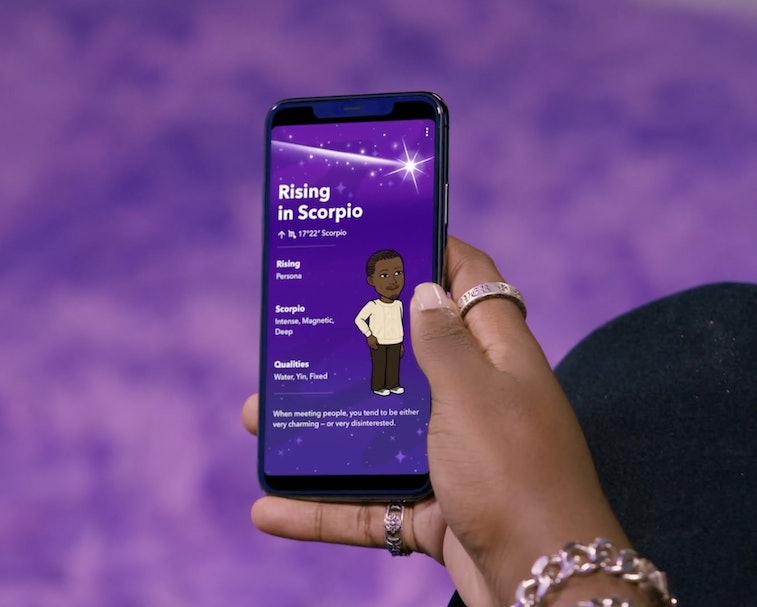 Almost everyone under the sun (or stars, for that matter) is having a love affair with astrology. So it's no surprise that Snapchat is joining the crowd with its very own astrology update. The social media app now has a detailed astrology option for users, including individual astrological profiles, insights about user personalities based on their moon, sun, and other elements in the chart, the positioning of the planets in the solar system and how that would, per astrology, affect them. All a Snapchat user needs to do is click the icon in their Snapchat profile.

The preliminary information about their date of birth is already provided to the app upon profile creation. Users are encouraged to use the astrology option with their friends, rendering the update social for everyone. So you can click on the astrology icon on your friend's profile and see how you go together as buddies. For those looking to find out about romantic prospects, the astrology update lets you check compatibility between you and your (potential) sweetheart. The layout is through Bitmoji with outer space backgrounds and interactive information.

To get the word out, the company has brought on some highly popular Instagram stars to discuss the astrology update, as is obvious below. Even skeptics, like yours truly, might find themselves gravitating toward these charts. Just for the heck of it.

Clever update — Apart from compatibility charts, you can learn about your own qualities based on your sign. You get access to your dominant "elements," "polarity," and "modality." It's a slide-based presentation so you tap through it. The company claims to have, at this point, 700 unique cards for star chart analyses.

At the end of the day, it isn't about whether users are serious astrology fanatics or just plain cynics. It's about Snapchat's ability to adapt to evolving user trends and topics. Not too long ago, the company shot back to relevancy by introducing a simple anime filter. The filter became instantly viral for how hilarious and at times frightening it was. It didn't require Snapchat engineers to create mind-bending updates. It was a straightforward option that got people talking.

This astrology update from Snapchat is bound to have similar success. It doesn't matter whether you take it seriously or not. Although many people are obsessed with astrology, their rising signs, what the moon means, and Mercury being retrograde, the Snapchat option can go beyond the stars and help people talk about the more vulnerable things in life: love, friendship, intimacy, disagreement, and other issues. Besides, it's a great opportunity to hate on Scorpios.