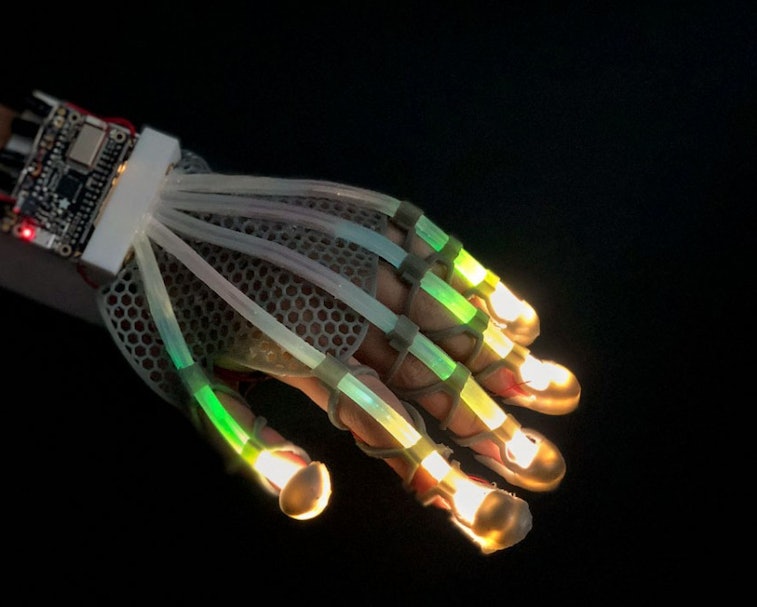 Robotic functionality and how we use virtual and augmented reality could do well with a bit of stretching. Cornell researchers have developed a stretchable sensor that is based in fiber optics and cheap LEDs, which ultimately creates a skin-like sensor that can emulate force, bend, tension, and other tactile phenomena. Say hello to soft robotics.

According to Cornell, the soft robotics approach is especially critical for developing more nuanced and complicated sensations that humans need to be aware of in order to survive on Earth. Rob Shepherd, the associate professor of mechanics and aero engineering at the College of Engineering led the research efforts and also published his findings in the Stretchable Distributed Fiber Optic Sensors paper. His team includes doctoral students Hedan Bai and Shuo Li.

Here's a look at the glove which comes with the aforementioned lights, dyes, and tactile cover. In a video demonstration by the Cornell team, linked in this report, scholars demonstrated the tactility of the glove with lights and dyes in an image juxtaposed against a computerized rendering of touch and movement. A light tap on the knuckle is instantly recognized by the sensor. Movement as subtle as softly curling your finger is immediately detected. The silica-based distributed fiber optic picks the smallest and most delicate wavelength changes, including tension, heat, and even humidity.

Game changer — The problem with soft material is that it can be deformed and rendered useless with complicated and intense movement. A reliable stretchable sensor will be able to resist that. For this Cornell project, Bai created a stretchable light-guide for multimodal sensing (SLIMS), which is comprised of polyurethane elastomeric cores. Designed to be transparent and able to absorb dyes, this long tube measures geometric shifts through optic fiber. Look:

Real-world applications — SLIMS sensors are cheaper than high-resolution detectors. So they're easier to make and on top of that, they can be integrated into other systems like robotic equipment for hands, feet, or legs.

Take the example of a hand equipped with a SLIMS sensor. The sensor, which relies on Bluetooth connectivity and lithium battery, operates along the length of all fingers and delivers signals to reconstruct mobility. A virtual reality app or an augmented reality program that attempts to teach a medical procedure or even fixing a car is easy to watch, sure, but it could do better with a corresponding SLIMS sensor. By wearing a glove like that, you'll be able to feel the amount of pressure and force needed (or not) to carry out the task. It wouldn't be a stretch to say this could change how we experience virtual and augmented reality simulation.