Snapchat is removing Trump from the promotional Discover page

“We will not amplify voices who incite racial violence and injustice by giving them free promotion on Discover.” 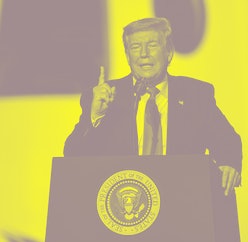 Snapchat will no longer promote President Trump’s account on the app’s Discover page, a spokesperson told Axios. The decision was made this past weekend, just after Trump’s tweets glorifying violence were hidden by Twitter. It’s the most far-reaching action on the President’s social media presence we’ve seen thus far.

Snap, the parent company of Snapchat, went as far as to specifically condemn the President’s recent behavior. And those with similar tendencies will not be promoted on the Discover page, either.

“We have spoken time and again about working hard to make a positive impact, and we will walk the talk with the content we promote on Snapchat,” wrote CEO Evan Spiegel in a statement posted to the company’s website on June 1. The memo was also sent to all employees the day prior.

“We may continue to allow divisive people to maintain an account on Snapchat, as long as the content that is published on Snapchat is consistent with our community guidelines, but we will not promote that account or content in any way,” the memo continues.

Thank you, Snap — Never thought we’d be sitting here giving our thanks to Snapchat in 2020, but, well, the thanks is deserved.

Though Trump’s account will not be taken down — a direct action that would require many violations of Snapchat’s platform policies — this is a great second choice. Most of Snapchat is private, limited to those on your friends list, but the Discover page is public-facing.

Discover is also curated by Snapchat’s team, rather than by an algorithm, which means anything shown on the page is, as the company calls it, free promotion. Trump’s account has long been promoted on the Discover page (the reasons for that one are unclear), so removing him from the page is meaningful.

According to Bloomberg, Trump’s Snapchat following has more than tripled in the past year, mostly due to his promotion on the Discover page. Snapchat’s decision to pull that support will significantly slow the spread of the President’s messages on the platform.

Thanks, Twitter, too — Snapchat has in the past limited its decisions to center only on users’ conduct within the app itself. That means only violations of the platform’s policies usually result in removal or other consequences.

This is a break from that protocol, and we probably have Twitter to thank for it. The company’s recent action to rightfully mark Trump’s tweets as misinformation and, later, to hide one for glorifying violence, has opened an all-out censorship war between social media bigwigs.

Mark Zuckerberg has drawn Facebook as an antagonist in this war by staunchly defending his stance against fact-checking. His personal opinions on the role of fact-checking in social media have even led its often-quiet employees to stage protests of their own.

The continued debate over who is allowed to post fake or inflammatory information on social media is far from over. Though Twitter certainly had a hand in escalating the issue so more people are talking about it, Snapchat’s response has by far been the most empathetic yet. Snapchat might not hold the same cultural relevance it did at the apex of its popularity — but its statement is powerful just the same.