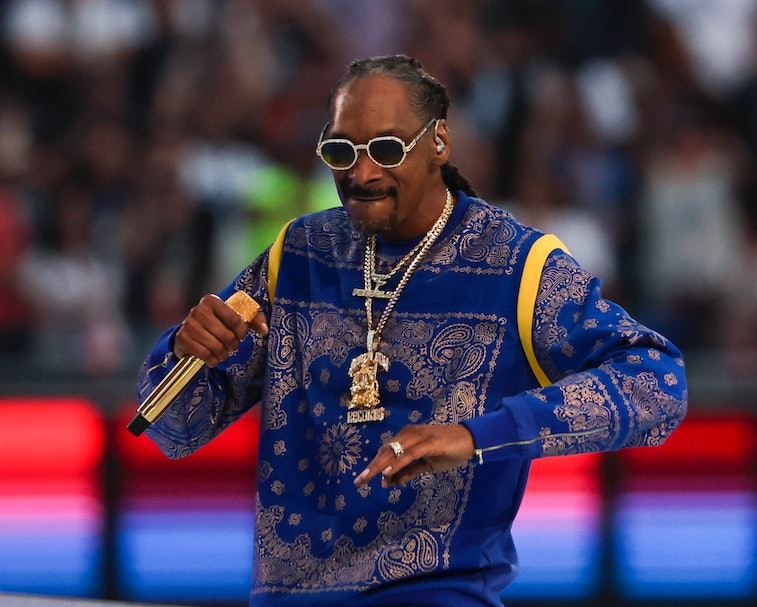 Snoop Dogg has had a pretty decent February — last Sunday saw him performing at the Super Bowl Halftime Show, and earlier this month he announced his acquisition of Death Row Records, the famed hip-hop label that gave him his start. His first act as owner? Cash in on that sweet, sweet NFT bubble money.

"We will be putting out artists through the metaverse. Just like we broke the industry when we was the first independent [label] to be major, I want to be the first major in the metaverse,” he said in the broadcast.

Although it pains us to hear of yet another metaverse plan, Snoop Dogg has been hawking crypto-related projects for a little while now, so this isn’t all too surprising. His most recent album, B.O.D.R. (“Back on Death Row”), was released on the blockchain alongside one of its songs available as an NFT. Then there’s, um, Snoopverse, on the metaverse venue, Sandbox, which is about exactly what it sounds like.

Details still a bit hazy — What Snoop Dogg and Death Row Records plan to do within the metaverse is still somewhat shrouded in (suspiciously pungent) smoke. Obviously there will be album drops and collectible goodies for super-fans, but apart from that it’s pretty vague. The same can be said about pretty much every other meta-related announcement these past few months, but that doesn’t seem to be dissuading anyone just yet.

The metaverse isn’t moving away — Despite Meta’s recent jaw-dropping losses, we have a sneaking suspicion that metaverse and blockchain-related marketing gimmicks aren’t going anywhere for a while. The industry may be shady and full of grifting opportunists, but there’s still a lot of potential money to be made in these areas — hell, even McDonald’s is trying to get in on the action. Snoop knows the score, and in all honesty will probably reap the rewards better than most. And you know what? Have at it, Mr. Dogg. That was a solid halftime show.