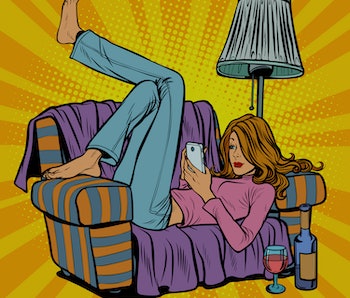 If the events of recent years — and the current pandemic-driven hellscape — weren’t enough to convince you, social media desperately needs a way to differentiate proper news from all the rest.

Be it an outdated link shared with fresh outrage or a dangerous home ‘cure’ for the novel coronavirus, out-of-context and altogether false information is the norm on sites like Facebook and Twitter, nestled right between those monthly picture-updates of your baby nephew and the occasional engagement announcement. Why? Because people aren’t taking the time to check sources before they hit share — or even read past the headline, for that matter. This we now know all too well.

Media literacy is being eroded by the nebulous presentation of information on social media, researchers say. That disheartening observation finds support in a new study, which showed that people don’t pay as much attention to sources when news is mixed in with entertainment content.

We’re getting sloppy — "We are drawn to these social media sites because they are one-stop shops for media content, updates from friends and family, and memes or cat pictures. But that jumbling of content makes everything seem the same to us," says study author George Pearson, a senior lecturer at Ohio State University.

“It makes it harder for us to distinguish what we need to take seriously from that which is entertainment.”

In a small study involving 370 participants, Pearson used a made-up social media site to assess the way we ingest the content in our news feeds. On the site, called “Link Me,” participants were directed to four webpages containing brief posts crafted to be either high- or low-credibility, each with just a headline, short summary, and a description of the source. These posts, though fictitious, were based on real articles and posts found on Reddit and Tumblr, and participants were vetted beforehand:

According to Pearson, participants’ responses after viewing the sites showed a marked difference based on how the news was presented. Those who read posts that were sorted by category — like current affairs and entertainment — demonstrated more attention to the actual source of the content, putting them in a better position to evaluate its credibility. People who had to pick the news out of a blended feed, on the other hand, paid less attention to sourcing and were thus more prone to falling for satire or fake news stories.

"They were less likely to verify source information to ensure that it was a credible source," Pearson said.

So what do we do about it? — The researcher suggests a relatively simple way to mitigate the issue: give us more structure. At the moment, all of the information on social media is presented in the same way. But if there were clearer visual distinctions, readers might know when to switch into critical thinking mode.

"There is no visual distinction on Facebook between something from The New York Times and something from a random blog," Pearson said. "They all have the same color scheme, same font."

"Right now, the structure of information platforms — especially social media — may be reducing positive media literacy behaviors," the researcher added. It could be that a relatively minor change in presentation snaps us out of the trap of mindless scrolling and reactionary sharing. But in reality, it’s probably not that simple. After all, just about every platform has been trying — and largely failing — to get a grip on misinformation.