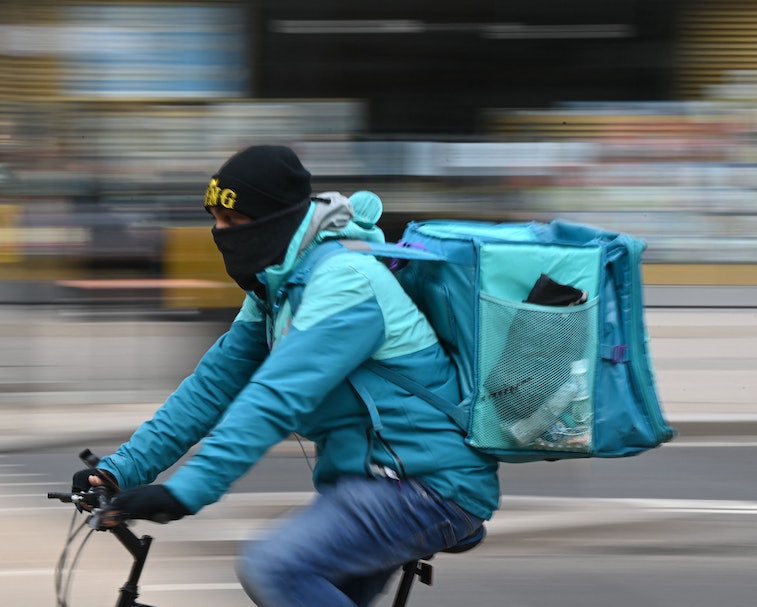 Two prominent British investment firms have slammed food delivery service Deliveroo with a scathing rejection just ahead of its initial public offering next week. Both firms, Aberdeen Standard and Aviva cite Deliveroo's treatment of its riders as their reason for pulling back.

For Deliveroo, which received a $575 million investment from Amazon in 2019, this is bad news. As CNBC reports, the company had hoped to raise $1.37 billion by the time it appears on the London Stock Exchange on April 7. If successful, it would land Deliveroo a sky-rocketing valuation worth at least $12 billion, The Wall Street Journal notes.

A bad track record — The Bureau of Investigative Journalism conducted a survey of invoices collected by the British Independent Workers’ Union from Deliveroo riders and the findings were alarming. More than 300 Deliveroo couriers were surveyed, and the results revealed that because Deliveroo does not guarantee minimum pay for deliverers, their labor is exploited to inhumane extents. In one instance, one Yorkshire rider received roughly $3 after working for more than 180 hours due to this lack of a minimum pay guarantee. As many as a third of Deliveroo riders said they got below the minimum hourly wage of $11.98 in the United Kingdom, according to The Guardian, which published the findings.

The head of U.K. Equities at Aberdeen Standard Investments, Andrew Millington, told Gizmodo, "As long-term investors, we’re looking to invest in businesses that aren’t just profitable, but are sustainable — employee rights and employee engagement are an important part of that."

Millington pointed to worries over Environmental, Social, and Governance (ESG), which is a standard criterion evaluated by shareholders when examining a business portfolio. "We will not be taking part in the Deliveroo IPO as we are concerned about the sustainability of the business model, including but not limited to its employment practices, and also the broader governance of the business," he added.

Problem? What problem? — A company representative for Deliveroo told Gizmodo that, despite the rejection from these two massive firms, Deliveroo is apparently receiving plenty of interest from other investors. The spokesperson said that Deliveroo had the approval of "some of the most respected global tech investors." This individual also justified the precarity haunting Deliveroo's gig workers as "freedom," making a case in favor of the "self-employed" work they do.

The rhetoric sounds oddly similar to Uber’s justification for its own employment practices. That was until the company faced a humiliating defeat in the U.K’s Supreme Court and had to classify its 70,000-plus labor force as workers. The same fate could well befall Deliveroo.