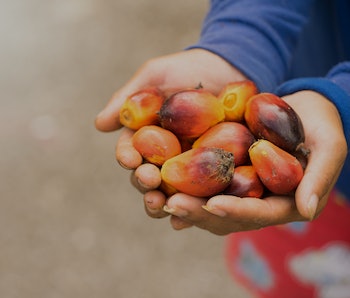 Maybe you already know palm oil is bad for the environment, but the industry is even seedier than you think. An AP News investigation into the palm oil industry revealed numerous horrors earlier this year and uncovered a pervasive child labor issue deserving of its own report.

An estimated 1.5 million Malay, Indonesian, and undocumented migrant children work for little to no pay to collect the palm kernels. Those kernels become oils in various cosmetic and food products, including Girl Scouts Cookies... which isn't exactly in keeping with the Girl Scouts' stated objective to build "girls of courage, confidence, and character, who make the world a better place."

Palm oil is everywhere — You might be surprised by how many items around your home contain palm oil. Many of Trader Joe’s processed foods use it, as well as brands like Nestle and Ferrero. Ferrero is one of the producers of Girl Scout Cookies in addition to beloved chocolate confections like Ferrero Rocher and Nutella.

You can also find palm oil in shampoos, toothpaste, and various cosmetics, but you might not have noticed due to the hundreds of different names companies call it. Sometimes you can spot “palm” in various -ites and -ates, while other ingredient lists obfuscate it even further by using the scientific name of the tree itself (Elaeis guineensis).

Some companies (not Trader Joe’s) are part of the Roundtable on Sustainable Palm Oil (RSPO), an association dedicated to sustainable palm oil throughout the supply chain. We’ve all seen “sustainable” stamped on products, but it doesn’t mean companies like Girl Scout Cookie bakers’ parent companies Ferrero and Weston foods are keeping it 100. Girl Scout Olivia Chaffin’s activism was sparked after noticing the “mixed” qualifier on a box of cookies from Ferrero’s Little Brownie Bakers, meaning as little as 1 percent of the palm oil could be sustainably sourced.

The human impact — Chaffin’s discovery isn’t the first time a Girl Scout has pushed back against the organization’s palm oil sourcing. More than a decade ago, orangutan lovers and anti-deforestation advocates Rhiannon Tomtishen and Madison Vorva put so much pressure on the organization that it became an affiliate member of the RSPO. Chaffin, though also fueled by environmentalism, has learned of a different atrocity — widespread child labor, a specter household names distance themselves from across industries.

In Malaysia and Indonesia, families are often forced to enlist the help of their children on palm oil plantations. An entire family can earn as little as a few dollars a day. Children are either pulled out of school or never go in the first place to work in grueling conditions replete with scorpions and toxin exposure.

Medical care is generally inaccessible to children for a myriad of reasons, especially if they are undocumented migrants. Undocumented children also live in constant fear of being caught and stash go bags to survive a night in the jungle during raids.

Stuck in a loop — For Malay and Indonesian families, illiteracy and desires to hold onto company-subsidized housing create a generational cycle. Some try to break this self-fulfilling prophecy by attending half-days of school while others have no choice but to work.

Kartika Manurung, who documents labor issues on palm plantations in Indonesia, told AP News: “When I … ask the kids what they want to be when they grow up, some of the girls say, ‘I want to be the wife of a palm oil worker.’”