SpaceX employees have finally had it with Elon Musk

“Elon’s behavior in the public sphere is a frequent source of distraction and embarrassment for us, particularly in recent weeks... It is critical to make clear to our teams and to our potential talent pool that his messaging does not reflect our work, our mission, or our values.” 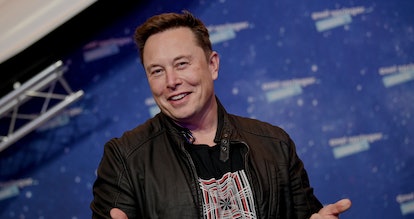 It’s not immediately clear what their final straw was — be it the tacit endorsement of Ron DeSantis, Florida’s virulently queerphobic governor for President, voting for a QAnon supporter, or that whole “trade-a-horse-for-sex” thing — but many SpaceX employees have finally had it with the Elon Musk’s chaotic behavior. An open internal letter collaboratively written by company workers and subsequently reviewed by The Verge states in no uncertain terms that they think their CEO’s spiraling edgelord persona is severely damaging the SpaceX image, along with their ability to promote an equitable, safe work environment that attracts the new talent.

“Elon’s behavior in the public sphere is a frequent source of distraction and embarrassment for us, particularly in recent weeks,” reads a portion of the letter. “As our CEO and most prominent spokesperson, Elon is seen as the face of SpaceX — every tweet that Elon sends is a de facto public statement by the company.”

Musk has yet to respond. Instead, he appears to be theorizing about population decline on Twitter.

It’s bigger than just Elon — The message’s authors encouraged fellow employees to either add their names or anonymously sign the open letter, which was posted yesterday within a SpaceX Microsoft Teams channel comprised of over 2,600 workers. In addition to their grievances with Musk himself, the letter takes issue with the company’s allegedly longstanding, pervasive issues with sexual harassment and discrimination.

SpaceX has purportedly promoted a longstanding “No Asshole” (their words, not ours) policy at the company, although the ambiguous terminology has been coupled with selective and shoddy enforcement. As such, employees have laid out a three-point strategy to tackle their issues, including publicly addressing Musk’s Twitter issues, holding all leadership equally accountable, and explicitly define and respond to all unacceptable behaviors. Check out the full riot act below:

An open letter to the Executives of SpaceX,

In light of recent allegations against our CEO and his public disparagement of the situation, we would like to deliver feedback on how these events affect our company’s reputation, and through it, our mission. Employees across the spectra of gender, ethnicity, seniority, and technical roles have collaborated on this letter. We feel it is imperative to maintain honest and open dialogue with each other to effectively reach our company’s primary goals together: making SpaceX a great place to work for all, and making humans a multiplanetary species.

As SpaceX employees we are expected to challenge established processes, rapidly innovate to solve complex problems as a team, and use failures as learning opportunities. Commitment to these ideals is fundamental to our identity and is core to how we have redefined our industry. But for all our technical achievements, SpaceX fails to apply these principles to the promotion of diversity, equity, and inclusion with equal priority across the company, resulting in a workplace culture that remains firmly rooted in the status quo.

Individuals and groups of employees at SpaceX have spent significant effort beyond their technical scope to make the company a more inclusive space via conference recruiting, open forums, feedback to leadership, outreach, and more. However, we feel an unequal burden to carry this effort as the company has not applied appropriate urgency and resources to the problem in a manner consistent with our approach to critical path technical projects. To be clear: recent events are not isolated incidents; they are emblematic of a wider culture that underserves many of the people who enable SpaceX’s extraordinary accomplishments. As industry leaders, we bear unique responsibility to address this.

Elon’s behavior in the public sphere is a frequent source of distraction and embarrassment for us, particularly in recent weeks. As our CEO and most prominent spokesperson, Elon is seen as the face of SpaceX—every Tweet that Elon sends is a de facto public statement by the company. It is critical to make clear to our teams and to our potential talent pool that his messaging does not reflect our work, our mission, or our values.

SpaceX’s current systems and culture do not live up to its stated values, as many employees continue to experience unequal enforcement of our oft-repeated “No Asshole” and “Zero Tolerance” policies. This must change. As a starting point, we are putting forth the following categories of action items, the specifics of which we would like to discuss in person with the executive team within a month:

Hold all leadership equally accountable to making SpaceX a great place to work for everyone. Apply a critical eye to issues that prevent employees from fully performing their jobs and meeting their potential, pursuing specific and enduring actions that are well resourced, transparent, and treated with the same rigor and urgency as establishing flight rationale after a hardware anomaly.

Define and uniformly respond to all forms of unacceptable behavior. Clearly define what exactly is intended by SpaceX’s “no-asshole” and “zero tolerance” policies and enforce them consistently. SpaceX must establish safe avenues for reporting and uphold clear repercussions for all unacceptable behavior, whether from the CEO or an employee starting their first day.

We care deeply about SpaceX’s mission to make humanity multiplanetary. But more importantly, we care about each other. The collaboration we need to make life multiplanetary is incompatible with a culture that treats employees as consumable resources. Our unique position requires us to consider how our actions today will shape the experiences of individuals beyond our planet. Is the culture we are fostering now the one which we aim to bring to Mars and beyond?

We have made strides in that direction, but there is so much more to accomplish.