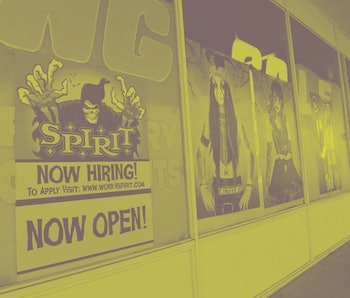 Spirit Halloween, the ubiquitous national retail chain best known for “haunting the buildings of every business Jeff Bezos killed,” is getting an actual, honest-to-God movie co-starring Christopher Lloyd and Rachel Leigh Cook. Per an exclusive announcement from Variety, the family friendly film is set to release this October, and has an official logline:

When a new Spirit Halloween store appears in a deserted strip mall, three middle-school friends who think they’ve outgrown trick-or-treating make a dare to spend the night locked inside the store Halloween night... But they soon find out that the store is haunted by an angry evil spirit who has possessed the creepy animatronic characters. The kids embark on a thrilling and spooky adventure in order to survive the night and avoid becoming possessed themselves.

So, basically it’s Night at the Museum meets Scary Stories to Tell in the Dark meets Jumanji. There is no mention in the announcement of Nick Lutsko, which is kind of odd considering how he’s the deposed King of Halloween. We reached out to Lutkso, who linked us to his official statement on the matter below.

Hail to the King — We at Input pride ourselves on being Halloween’s most popular tech culture site (as determined by internal metrics), so don’t take this wrong way, but... the Hollywood powers-that-be better find a spot for Lutsko and/or his Spirit Halloween song trilogy. It’s the least they could do for the guy who managed to harness the 1,425 location retail chain’s collective cultural cachet and turn it into an epic mythology of apocalyptic proportions.