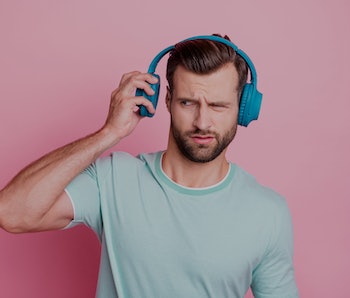 Spotify's payola style of management is always a topic of criticism. To many, the streaming service's method of using the influence and cultural appeal of certain artists and labels to attract consumers sounds a dash exploitative — because it is, in essence, manipulative and forces musicians into a tight corner. Keeping to that theme, Spotify is now allowing artists to promote their own music as long as they are OK with cuts in royalty rates.

In a company blog post, Spotify claims that it wants to "amplify" — a buzzword used by tech companies implying that there will be paltry or no monetary compensation — "artist input in your personalized recommendations."

This is on top of its ongoing issue of neo-fascist playlists, invasive measures to "predict" your personality traits, a jungle of manipulated keywords that are flooding the platform with generic music, and Spotify staffers not particularly digging Joe Rogan's podcast.

Here's how it will work — Spotify calls this venture an "experiment," which is likely meant to pacify the criticism the entire project will inevitably cause. The "experiment" is meant for not only the Artist Radio but also Autoplay, wherein the company will allow artists and labels to "identify music that is a priority for them, and our system will add that signal to the algorithm that determines personalised listening sessions."

Spotify adds, "This allows our algorithms to account for what’s important to the artist – perhaps a song they are particularly excited about, an album anniversary they are celebrating, a viral cultural moment they are experiencing, or other factors they care about." Since the project does not involve an "upfront budget," per Spotify, the company will require artists and labels to "agree to be paid a promotional recording royalty rate for streams in personalised listening sessions where we provided this service."

Musician rights activist and songwriter David C. Lowery has already slammed the announcement, saying that while it isn't exactly illegal, it is nonetheless a "form of payola or sponsored social media post." The streaming service is already unequal and with this "experiment," it's going to become even more skewed in Spotify's favor as the company is effectively making artists and labels pay to access their listeners.