“It is an ongoing fairytale in modern history about how Swedish wiz kids changed the music industry forever." 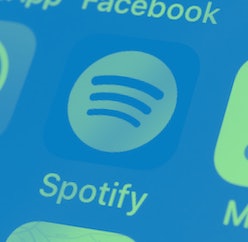 Spotify’s founding story is making its way to Netflix. The scripted television series is inspired by the book Spotify Untold written by Swedish business reporters Sven Carlsson and Jonas Leijonhufvud. Netflix says the series will be available in English and Swedish, and no release date has been announced yet.

We're more interested in the sequel — Given the fact that Spotify is currently under heavy attack by the second most valuable company in the world (Apple, that is), with Amazon, Google and now even TikTok-parent ByteDance bringing up the rear, this origin story might be less exciting than the next one: who is it going to buy... or get bought by?

The details — The upcoming show will center around Spotify co-founders Daniel Ek and Martin Lorentzon and is described by Netflix as showing how “big dreams can help small players challenge the status quo.” The origin tale will be directed by Per-Olav Sørensen and developed and produced by Yellow Bird UK. Berna Levin will serve as executive producer.

"The story of how a small band of Swedish tech industry insiders transformed music – how we listen to it and how it’s made – is truly a tale for our time," says Levin. "Not only is this a story about the way all our lives have changed in the last decade, it’s about the battle for cultural and financial influence in a globalized, digitized world."