'Squid Game' is now Netflix's most watched show ever (we think) 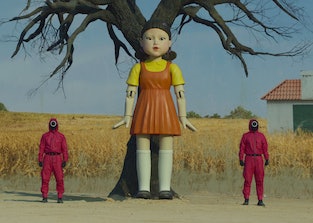 The number of “fans” for Netflix’s ‘Squid Game.’

In news that probably surprises very few people at this point, Netflix announced yesterday that the South Korean dystopian drama, Squid Game, is now the streaming service’s most watched show of all time, beating out pop-cultural zeitgeist-makers like Bridgerton and Tiger King... sort of. “Squid Game has officially reached 111 million fans — making it our biggest series launch ever!” the company tweeted. Of course, this is Netflix we’re talking about here, so the claim comes with a few caveats.

First off, the streaming giant is notoriously secretive about its statistics and doesn’t allow its publicly released numbers to be independently verified. Secondly, Netflix stated in the past that it counts a “viewer” as anyone who sits through just two minutes or more of a program, which... is being a bit generous when it comes to the definition of “viewer.” Still, it’s pretty clear that Squid Game is an extremely popular international success for Netflix, and is currently the most popular show in at least 94 countries. Netflix, for its part, currently has “No. 456 + No. 001 forever” as its Twitter bio, if that tells you anything about how hard it’s pushing the series.

Netflix’s streaming conquest continues — Netflix’s push into international market success is only one tentacle (so to speak) of its overall goals for streaming entertainment hegemony. Recently, the company announced its plans to expand into streaming game markets, purchased its first development studio, and even has released a VR title via Oculus’s App Lab. Taking bets now when Squid Game: The... Game will make its way to our TVs and smartphones.